Oh. My. God.  Best hype video ever? Football season is creeping closer and closer and I for one can’t wait one more minute. Waking up at 10 AM to see Herbie, Corso and Fowler on College Gameday. Corso’s crazy ass putting on his Brutus Buckeye head, or dressing up as the USC Trojan. Getting your first wave of bets in for the noon kickoffs. Cracking your first beer/ripping your first shot of Fireball before noon. CBS airing the main SEC game at 3:30. Maybe get a nice Baylor vs Oklahoma Big 12 game starting at like 7. This is when you’ll usually take a little break from your Saturday drinking and collect yourself because College Football Saturdays are a marathon, not a sprint.  Then you’re ready to feast on the main dish at 8 pm on ABC. Get to hear the sweet sounds of  Chris Fowler and Kirk Herbstreit in prime time. So much build up the week before for the #2 team to play the #5 team. 3 straight hours watching the game at a friend’s house or at the bar. Then the game ends. Oh, but you’re not done. The PAC 12 games are just starting and Marcus Mariota and Oregon are playing Arizona at home in Eugene.

BTW is Herbie the most beautiful man in America? That’s rhetorical. He is.

This is why I choose college football Saturdays over NFL Sundays 97 times out of 100. It’s a nonstop football gala from 10 AM Saturday till about 2 AM on Sunday. No downtime, football in your face for about 16 straight hours. And the most underrated part of College Football Saturdays? No work the next day. So you can drink your face off all day and not have to worry about any responsibilities in the future. 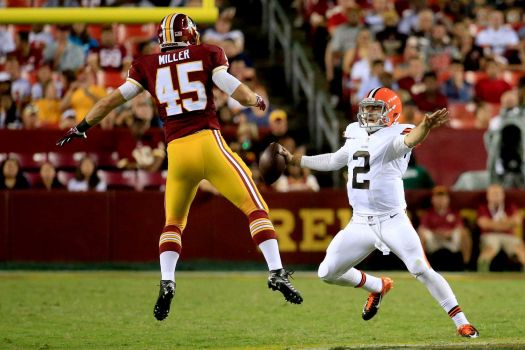 I’m fired up right now. My eyes are bloodshot, steam coming out of my ears and hair on fire. Blood pressure at a cool 160/100. Can’t focus clearly. Vision is kinda blurry…  All last night and into today I’ve been hearing and reading garbage everywhere I look. Talk radio shows already wondering whether Johnny Manziel has enough upstairs to have a successful career. Fans calling into said shows and declaring Johnny a “bust.” Calling for CONNOR SHAW to start for the Browns. Writers blaming Manziel’s offseason escapades on his early struggles. Saying “he should have been studying his playbook instead of partying.”

This is actually happening. This is the world we live in.

Did I mention Johnny has thrown 27 passes exactly… twenty seven… in a couple of quarters in 2 preseason games. That’s right. Two preseason games. Newsflash, guys-  Of course a rookie quarterback may struggle. Holy shit. Brand new playbook, brand new team, brand new coach, brand new terminology, brand new linemen, receivers, backs, tight ends… there’s literally nothing that’s happened so far that is in any case surprising. Did anyone actually think that a quarterback who has never huddled, who has never really had a playbook, who is undersized and who is known as an “improviser” would come into the NFL and set the scoreboard afire in his first couple live action games? You won’t find a bigger Manziel fan than me and even I knew he would struggle.

And now to the finger heard ‘round the world. You’d honestly think Johnny had knocked his wife unconscious in an elevator. Ah, wrong team. Nevermind. I honestly feel like Im living on a different planet hearing the talking heads on ESPN discuss the ramifications of a middle finger. Am I alone in feeling that flipping someone the bird is one of the least offensive things in the world? People flip me off all the time on the highway, I’ve never been disgusted or thought to myself “what immaturity, they’ll never be a successful driver on the highway.” It’s mind boggling really. If you were on Twitter last night you’d have actually thought that Johnny was the first player in the history of football to ever swear on the field. The holier than thou Peter Kings and Mark Schlereths of the world apparently think a hand gesture will somehow dictate the way a player’s career pans out. It’s a sign of immaturity. It’s a sign of other teams getting to him….

Umm, hello? Did anyone watch Johnny Manziel play at Texas A&M? Anyone? Or are we discounting his past 2 seasons at College Station? The guy is a fire breathing, shit talking ball of energy who thrives on competition and confrontation. This isn’t a secret. Hey Schlereth, why don’t you turn on your own network for me one time. Oh, never mind you’ve got to play the troll this upcoming segment. Got it.

But the clickbait “Is Johnny Manziel a Bust?” (This post actually) and “Johnny Football In Over His Head” titles of articles will get the page views. Those will get the clicks. That’ll get the people to start forming the idea in their head that Johnny Manziel was a wasted draft pick. Because of course all rookies come in and light it up right away a la RG3 and Andrew Luck. Of course.

But yeah, let’s write Johnny off after 2 preseason games because he threw a couple incompletions and struggled. Fuck him. He parties and doesn’t care about football. No wonder he’s having a rough start to his career. Remember that picture on the swan? Remember when he went to Las Vegas? Remember that SELFIE he took?!? The guy just doesn’t want it. Doesn’t have the right mindset. Diva. Immature. Cleveland will have to draft another quarterback next year. Johnny will be bagging groceries in 2 years.

Whatever. At least we have The Sex Cannon.

PS- Is ESPN seriously going to blur out a middle finger after they showed a looping clip of Tony Stewart killing a guy with a car? 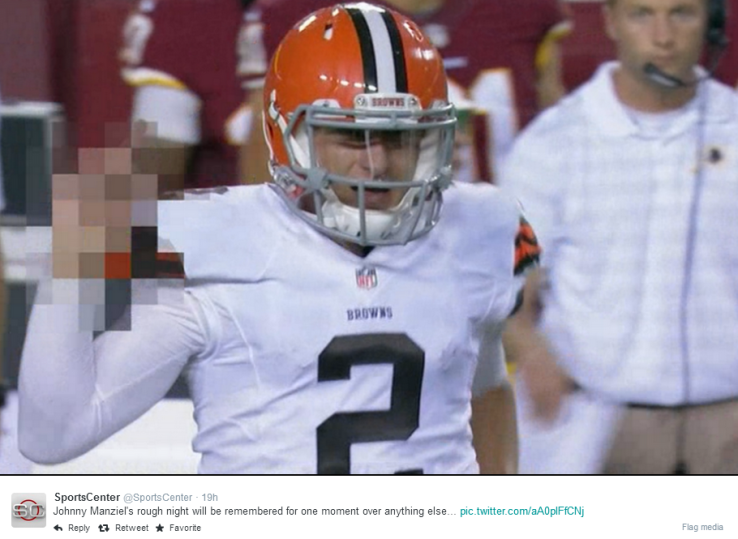 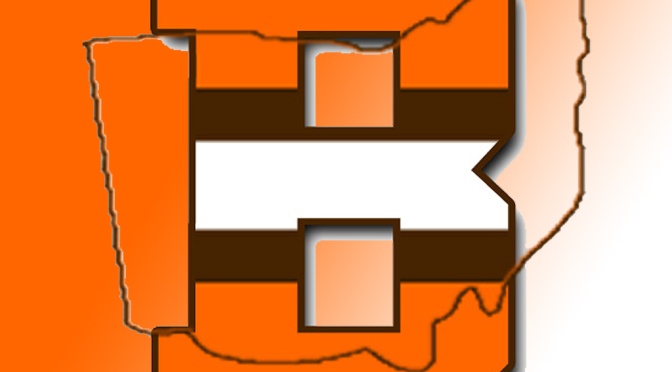 So there’s a couple of these lists going around the internet nowadays. Picking players from their birthplace to play for their coinciding hometown NFL team. For the Browns I picked players from all parts of Ohio. The Bengals can kick rocks. No one cares about the Bengals, not even people from Cincinnati. I picked the top players at each position according to their preseason Madden 2013 Overall Rating. Overall, it’s a pretty good squad with the strengths being the linebackers and secondary.