Bottlegate was gifted to the Internet in August of 2014 as an alternative to “official” and “professional” Cleveland news media outlets who are “trained” to write about things and get “paid” to do so. We don’t have press passes. We don’t have sources. We don’t have journalism degrees. Just a couple of guys suffering through Cleveland sports fandom with the desire to share our misery with others. If one of your idiot drunk friends has talked about it at a bar before, we probably blogged it. All products  of the same esteemed Northeast Ohio public high school, we’re the bloggers who have no business blogging. 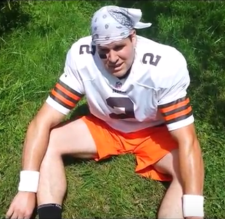 Likes pizza and tweeting from the @Bottlegate Twitter account. Has an Alaskan Malamute named Bodhi. Was named “Most Athletic” in high school but now can’t run a quarter mile without collapsing. Never had a waffle. Left handed. Storm Chaser. Mount Union.

The third best writer in his family. Played baseball in college, nicknamed “The Academic.” Ask him why sometime. One of the few and the proud Indians season ticket holders. Golden Tee scratch golfer. Lived in Charlotte for a minute. YNWA. St. Bonaventure.

One thought on “About us”