Seattle fans are so funny

The first drive was fun. It ended in a touchdown but the biggest play was Marlon Moore basically ending Earl Thomas’s life

And then Johnny found Gary for 6

Cam Erving did some Cam Erving things. So frustrating.

Ballboy with the slowest fall ever https://t.co/JTeiw3aKAg

And before the half ended the Seahawks were allowed 1 final untimed down because of a Browns facemask. Instead of going into the half down 17-10 (respectable), the Browns were down 20-10 after Seattle kicked a FG

Browns commit a defensive penalty on the last play of the half, giving the Seahawks an untimed down. That's so Browns.

Johnny scrambled for a nice first down. Coach Flip really really wanted him to get down so they wouldn’t have to play Austin Davis

Hatin ass ref got in the way

Nice to see our players fighting each other

EVERYTHING IS FINE. THINGS ARE FINE. https://t.co/W6pBvGbCbx

Obviously we all want the #1 pick and say we want the Browns to lose to secure it, but once that game starts I can never bring myself to actively root against the Browns. As things stand now I just want to see a team that hasn’t given up and whose young players are making progress (Manziel).

Not the fullest house at kickoff

Johnny signed a $100 bill before the game. This was when I knew the Browns were winning this game.

I would’ve used a $1 or $5 bill but whatever floats your boat I guess.

Not big fans of Dwayne Bowe or Ray Farmer 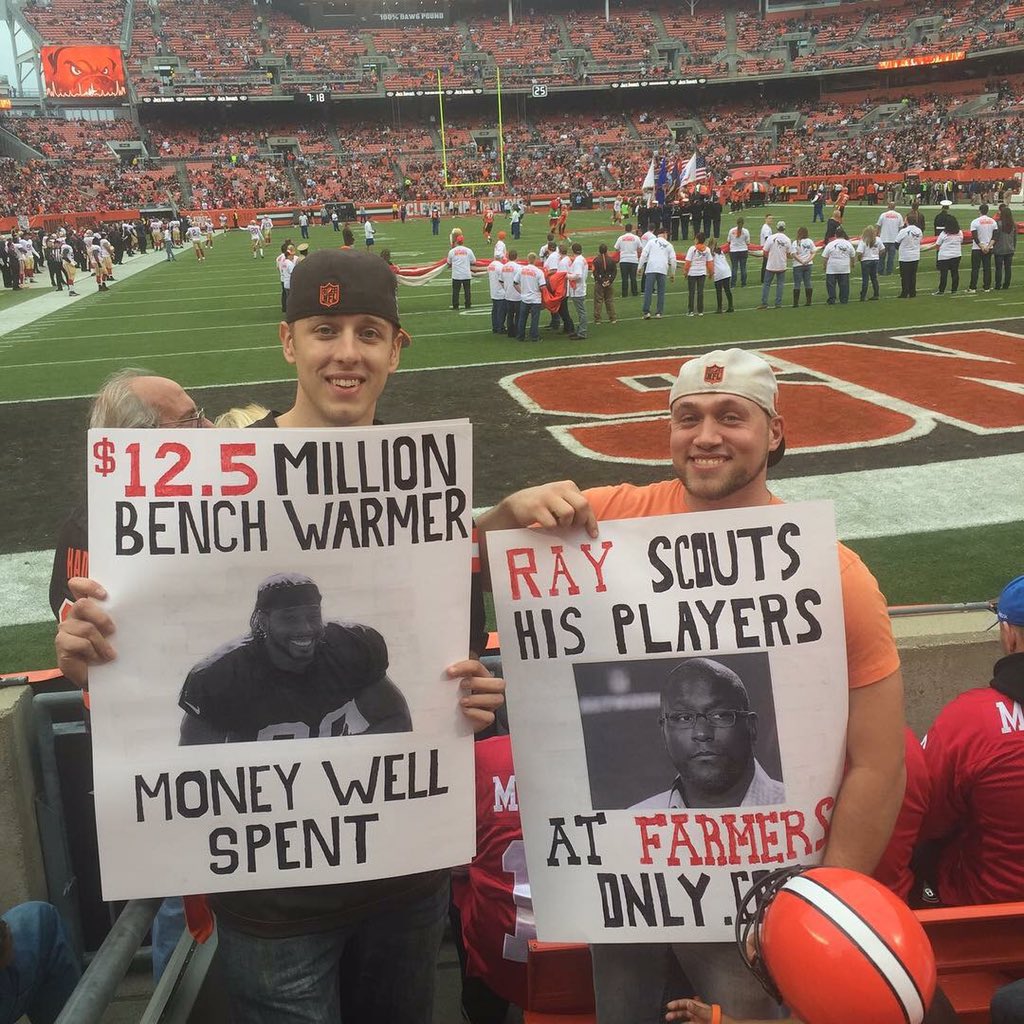 Cocky Johnny was back!

He threw a bad interception and boy, he let this Microsoft Surface tablet have it. Stupid piece of technology.

Dude getting tossed for smoking weed in our section. (It was not Josh Gordon) pic.twitter.com/c82AEz0leJ

Police here to take away the weed smokers. pic.twitter.com/LcuOc2aqCC

DO NOT show this to anyone on the Really Big Show pic.twitter.com/XX0N3zGYa5

DWAYNE BOWE REALLY PUT ON EYE BLACK TO STAND ON THE SIDELINES pic.twitter.com/XjrZgdKF1J

The Big Sumbitch was EVERYWHERE

First win in 63 days and first win in December since 2012. Enjoy it, you assholes.

Now to Manziel, because nothing else matters really:

Are we allowed to get excited that maybe, just maybe, a quarterback that the Browns took in the first round is showing actual progress on the field? Yes.

Are we allowed to worry that we’ll wake up Monday or Tuesday morning and see his drunk mug plastered all over the Internet? Yup. As of right now I’m a billion percent more concerned about Johnny off the field than on the field.

It’s OK to have a little positivity after yesterday’s game, it really is. Watching Manziel on the field is so fucking fun. Just compare the Bengals game with Austin Davis to yesterday’s 49ers game. Yesterday we saw some Texas A&M Johnny. Talking shit, signing that $100 bill before the game, pumping up his teammates. This is what I’ve been waiting to see since he’s gotten here. The kid thrives on chaos and when he plays cocky, he plays well.

Newsflash- it’s a good thing if the Browns don’t have to take a quarterback with 2016’s top 5 draft pick, I promise you. If you’re a fan of the Browns, you should be rooting for him to show real progress in these next 3 games. Will it be enough to keep him around? Who knows. But going into an offseason where we know who the starting quarterback is hasn’t happened to this team in a long time. I don’t know what the future holds, but I know yesterday was fun.

On to Seattle. In Seattle. Ehhh

Let’s look at the game tape:

The fans were pumped!

You knew it was going to be a good day when the Browns sent out an Instagram post highlighting Justin Gilbert when Gilbert was inactive.

But once the game started, the Browns came out firing!

Ah, the ol’ get burned and then strip the football and recover play. Works every time!

This is better. I love Kirksey correcting Bademosi. pic.twitter.com/zE0wN9OtTi

Some putz from Pittsburgh tried to rip Manziel’s head off, should be kicked out of the league forever and sentenced to death imo

"Whatever the coaches ask of us we try and do the best of our abilities but at the same time.. You let a player be a player” Tramon Williams

See you for MNF.

Also, #97 from OSU looks pretty good in the Brown and Orange