**If you haven’t seen Breaking Bad and the first three episodes of Better Call Saul, you don’t have to go home but you can’t stay here.**

I gotta be honest. Last night was the first Sunday/Monday since BCS started that I didn’t go to bed mouth still agape from the episode(s) I just watched. There was no Cinnabon Scene, no big Tuco reveal, no showdown in the desert or dufflebags filled with money. But going through the episode again to write this blog, I’m actually happy about that. Gilligan & co. do give us our fair share of those home run scenes but they don’t have to rely on them. The first three episodes have been home runs. We learned more about Jimmy in Hero than those three combined.

So far, every episode of BCS has started off with a flashback. Last night was no different. A young Jimmy leaves the bar with another man who he clearly has marked for one of his schemes. He offers to take him across town to an “after-hours” place and the man agrees. After some interesting conversation in-transit that included howling like a wolf and Jimmy responding with “S’all good, man” (get it?) when asked his name, they take a turn down an alley (not-so-coincidentally right after Jimmy howls himself). They find a wallet and its heavy-set owner next to each other. Jimmy pokes him with a stick to check if he’s alive but he looks to be just passed out drunk. The fat guy gives a nice little soliloquy filled with McDonald’s and multiple buttholes before passing out again. The stranger decides to take his money, with Jimmy calling dibs on his watch. After determining it was a Rolex (and assuming it to be worth more than the money from the wallet), the stranger gives Jimmy the wallet money plus whatever he has on him, takes the watch and makes a break for it. Turns out the watch is fake, Jimmy and the fat guy were in cahoots and there’s plenty more where that came from. The scene ends with Lennie Small praising Jimmy while he lights up a big old bong. Remind you of someone?

Snap back to reality. Jimmy tries to rationalize taking the money from the Kettlemans, saying he could accept it as a retainer if they would use him as their legal counsel. Mrs. K passes, saying he’s “the type of lawyer guilty people hire”. Gilligan spreading a nice thick layer of irony on our toast there. Also Mrs. K is a fire emoji in real life:

Jimmy didn’t want to take the money. He really didn’t. But then he did. And here’s how he laundered it (/u/phone_boy): 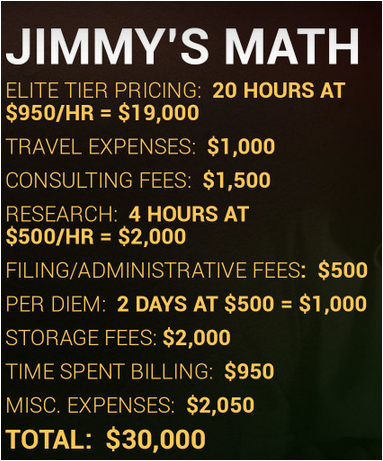 At this point, and probably even before he took the money, I’m convinced Jimmy had the rest of the episode planned out. He takes his enlarged wallet over to the suit shop and orders himself a fancy new getup that looks remarkably like Howard Hamlin’s signature sky blue shirt, white collar and pinstripe suit.

He returns to the nail salon to get spruced up for his new advertising campaign. Continuing his off-beat movie references, Jimmy tells the ladies he wants his hair in tight curls a la Tony Curtis in Spartacus. Now I’ve never seen it, but I’ll bet I know why it’s a funny reference for people who have.

We also saw some depth from Kim this episode. She obviously has her shit together working for a law firm of that size, but also has a soft spot for the love-able loser Jimmy. She tries to talk him out of his vendetta against HHM, serving him with a cease and desist. Now Jimmy ain’t no Johnnie Cochran but even HE has to know this is a losing battle from start to finish. His brushing aside of the letter and failure to heed Kim’s warnings is why this was clearly another con the entire time, not just turned into one after the judge ruled in Hamlin’s favor.

The judge orders Jimmy to take the billboard down within 48 hours. After a short Gilligan montage of him getting shut down by every news outlet he calls trying to get his story picked up, we see Jimmy haggling with two college students about the angle they’re shooting him at in front of the billboard. He insists on getting him and the ad in the shot at the same time. That’s because shortly after his soapbox speech to the camera, the worker taking down the billboard falls off the catwalk and is left dangling by a strap around his waist. Superhero Jimmy musters up some courage, climbs up to the board and saves the dam in distress in front of a crowd of people. Then daps him up. But that billboard worker…we’ve seen him before!

(from the montage in Episode 2) (/u/attorneyatloblaw)

The story gets picked up by the local paper, to the tune of a full color photo on the front page. It also leads to a whole SEVEN voice messages on Jimmy’s phone when he returns to the office. The next day he makes a run to Chuck’s early so he isn’t late to any of his appointments. Not wanting Chuck to see him indeed going back to Slippin’ Jimmy like he insisted he wasn’t in Episode 2, he keeps the local paper in his trunk before delivering the national ones to his brother. Chuck questions it, but Jimmy shrugs it off, surmising that they forgot to deliver it that day, or that some kids had grabbed it (“Because if there’s one thing kids love, it’s local print journalism.”) After Jimmy leaves, Chuck sees the paper in all of his neighbors driveways, wraps himself up in the space blanket and prepares for a journey across the street. In a beautifully-filmed scene that reminded me of Jesse Pinkman’s first trip on heroin, Chuck barely makes it back alive after taking the neighbor’s paper and leaving a 5 spot to cover it. The neighbor saw him do it through her front window but looked more concerned than anything. The neighborhood probably all know about his condition and look at him with pity rather than anger.

Chuck opens the paper to see Jimmy the Hero. /episode

Some people might think Jimmy “breaking bad” aka turning the corner towards Saul was him accepting the bribe from the Kettlemans. But the intricacies and levels of his scams we saw in the flashback, the billboard, and even the situation with the skater twins shows he’s been working outside the law for quite some time. It’s almost an opposite to Walter White, who was Mr. Chips turned into Scarface. Obviously not nearly as sinister (yet), but it seems Jimmy’s story will be Scarface trying to turn into Mr. Chips but ends up just going back to being Scarface.

Also, lost in the episode somewhere was a quick back-and-forth between Jimmy and Mike. Jimmy talks about the Kettleman situation, saying something to the extent of “you’d think criminals would be smarter than they are. Kind of breaks my heart.” That ends up being the crux of his business as Saul Goodman. It also kind of foreshadows the fact that the smartest criminal he’d ever come across would eventually put him in a Cinnabon in Omaha.

(/u/sarathkurmana) Some people are saying that yellow shirt over Jimmy’s right shoulder is a nod to Gus Fring and his wardrobe. I’m not 100% convinced, as it could easily be Dwight Shrute as well.