Johnny Manziel to Travis Benjamin for a 50-yard touchdown pic.twitter.com/ADEsq0JJWz

#Browns Manziel: "I knew when Orakpo said 'oh shit' it was going to be a good play"

Hey guys! Sup? Anything good happen yesterday? Any quarterbacks with #2 on their jersey play? Any guys named “Johnny” finish  8-15 for 172 yards and 2 TDs? Did anyone have  a 133.9 QB Rating? Was it the highest QB rating for a Browns player since 2007? Is that good? Did he break it? Are we still alive? Has anyone given him an ounce of credit? No? OK. The more things change the more they stay the same.

Johnny played well yesterday, folks, and if you think otherwise “your a idiot.” The offense as a whole was OK. 3 offensive touchdowns, a special teams touchdown, and no turnovers. Not going to lose many games like that. We actually had some semblance of a running game and that was pretty pretty cool to see.

The defense harassed Golden Boy Marcus all. day. long. 7 sacks and about a BILLION pressures and hits. It was a rough go for the NFL’s new flavor of the week. He looked off his game in the first half and you could tell every time he dropped back to pass he knew in the back of his mind that he’d be getting hit. The Browns mentally beat down Mariota until the clock hit zero. Seeing it live in the stands was delightful. The Browns were able to corral him and make sure he didn’t come close to the game he had last week.

Gee, I don’t know, maybe it’s stupid to crown or rip apart young quarterbacks in their first couple of starts?

The colors were flying high and proud

Then the keg bowling started

And we took some shots

And a guy jumped off of a roof

We hula hoop harder than you party. In the least pervy sounding way possible, I was absolutely mesmerized by this showmanship

Cleveland; we hula hoop harder than you party pic.twitter.com/g6NiO8sgkA

Spotted on the way to the stadium:

Crow found his way to the goal line for 6

The defense was allllll over Mariota all game. Welcome to the NFL kid, now go pick up your helmet and shoe

Travis Benjamin caught a punt, dipped and dodged, and scampered his way in the end zone with under a minute left to play in the first half. HUUUGEE to go into half with a 21 point lead. You knew the game was basically over when this happened

I know how it feels when your punter gets embarrassed (Spencer Lanning/Antonio Brown) but if you’re the Titans punter do you even show your face today? 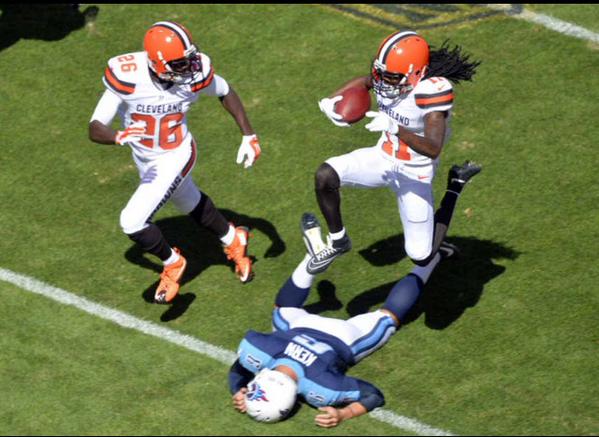 Tennessee scored a few TDs on a couple nice throws from Mariota in the second half (that throw to DGB was a beaut) but the Browns were able to put one last touchdown on the board when this happened:

What A Time To Be Alive. http://t.co/Qw2JQFKk2w

Big boy play right there at a crucial moment. It was great to be there live.

#Browns Manziel on what this means to the team and him personally pic.twitter.com/cFhzlKmMbF