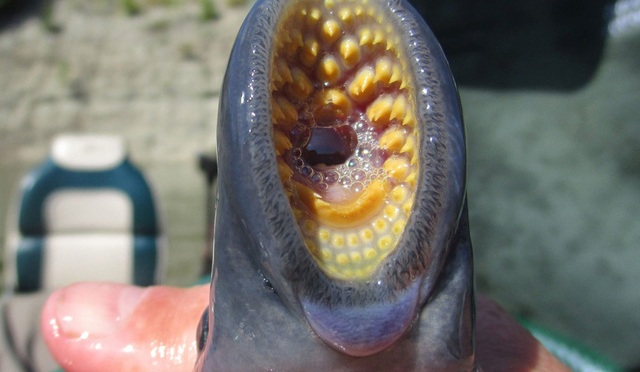 It’s about a foot-and-a-half long with dark gray mottled slimy skin and rows of teeth lining a circular mouth, something like a cross between an eel and your worst nightmare. And it’s more common in Lake Erie than you might think.
“It’s amazing. It’s shocking. It’s actually kind of scary looking,” said Doug Hershman. “I’ve never seen a fish like that.”
That is a sea lamprey, a creepy creature scientists with the Cleveland Metroparks found in the Rocky River on Friday during a routine equipment test.

GOO!!! Someone get Jeremy Wade on the phone right now! What is THAT and why is it in Ohio? KILL IT, KILL IT WITH FIRE!

September 24, 2014. The day that I proclaimed that I will never step foot in another lake/river/pond in Ohio again in my life. No thanks, dude. Right when you think Cleveland is starting to turn the corner; there’s new businesses, the Hofbrauhaus is opening soon, the nuCLEus is on it’s way… this Hope Solo lookalike pops up and ruins everything. Seriously, Ohio bodies of water are so screwed right now. We’ve got ISIS guys carrying Ebola coming across Lake Erie, man eating sharks found in the Ohio River, there’s always the threat of the Cuyahoga catching fire, and now the main character from Tremors is lurking around in Rocky River. Our pets heads are falling off! No fucking thanks. You can find me in the nearest in ground swimming pool with a margarita in my hand and not having my blood sucked out by a river monster.