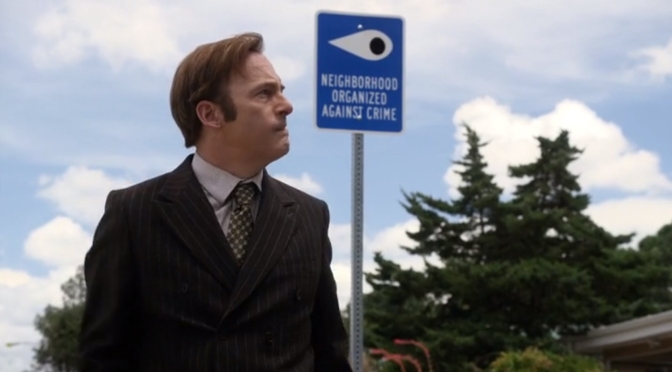 So here we are. Halfway through the first season of Better Call Saul. Five down, five to go. If you’ve read my previous recaps you know I’ve been more than pleased. We’re five episodes in, the Breaking Bad butterflies have worn off and the show is proving it can stand on it’s own without using it’s predecessor as a crutch (as evidenced by the exponential shrinking of our BB callback list at the end of every recap). While “Alpine Shepherd Boy” was a bit all over the place, it wasn’t without substance and laid some more groundwork for the back nine of Season 1.

Episode 5 is the first of the season whose title doesn’t end in the letter “O”. It was also the first of the season not to begin with a flashback. It picks up right where Hero left off, with Chuck in his house and Jimmy on the front page of the paper he just stole. Turns out I was wrong last week about the old lady neighbor feeling sorry for the ‘crazy old man’ because she went ahead and called the fuzz, who arrive at his front door much to his dismay (the episode also ends in an unwanted visit by the cops, but we’ll get there). While Chuck gives a lengthy deposition explaining why the officers have no probable cause to enter his home, they circle around to his back door and see the fuse box torn to shreds and a nice little collection of cans of white gas. They then choose the only rational course of action at that point: kick down the door and taze the shit out of a 65-year-old wrapped in a space blanket.

While this is going on, Jimmy is out following up on some of the voicemails he got as a result of his “marketing campaign” last week. In what could possibly be the funniest group of scenes in all of BB and BCS, we see first hand the type of…diverse personalities that would call a lawyer off of a billboard. The first is a seemingly filthy rich redneck who wants to secede his land from the U.S. to become “the Vatican of America”. Brilliant work from Odenkirk in this first encounter, you can see the “sure, fuck it” in his face when he’s offered a million bucks, the excitement when the client goes to get him his $500,000 up front, and the crushing defeat when he realizes the guy is trying to pay him in monopoly money.

The second encounter, and possibly my favorite scene this season, is with a father who invented a toilet that talks to his kids during potty training. I’ll just leave this here…

“I hope you do make a fortune cause Chandler’s gonna need it to pay for his therapy!” got a solid LOL out of me. And the third was with an elderly woman who enlisted Jimmy’s help to write up her will, one Hummel figurine at a time. “I thought all lawyers were idiots.” “No, only half of us are idiots. The other half are crooks!” Nice self-awareness from Jimmy there.

Right before Jimmy finds out what happened to Chuck, he’s in the salon explaining the insanity of his day to Kim while he tries to paint her toes. It’s becoming more and more clear that there’s something going on between the two of them,  the tension in this scene being the most recent piece of evidence. Whether they had a past or have a future (or both), Kim is probably going to have to chose where her allegiances lie between Jimmy and the law firm pretty soon here. My bet is on the former.

Kim gets a call from Howard telling her about Chuck. They both rush to the hospital, where Jimmy frantically tries to “ground” Chuck’s room as much as he can in a building that’s completely covered in technology. The doctor is pretty up-front with her opinion that this is a mental illness, going as far as asking Jimmy to admit him to a mental facility. It’s also the first piece of hard evidence we see that it is, in fact, mental when she turns the hospital bed back on without Chuck knowing and he fails to react. Another interesting bit from this scene is the awkward “no” head-shake that Kim gives the doc when she asks if Chuck displayed any signs of mental illness before he left the firm. The camera seems to linger a little longer on her face than it would if it was just a simple “no” answer.

Howard meets them at the hospital after a while. Jimmy believes he doesn’t want Chuck admitted because that would make Jimmy his legal guardian, allowing him to force HH&M to buy Chuck out. We can’t really tell whether this is true or not…Howard has been painted as the antagonist the whole season, but he was very close with Chuck at one point and Gilligan shows have a knack for drawing sometimes unwarranted hatred out of the audience (looking at you, Skyler). Jimmy almost lets his disdain for Howard overshadow his love for Chuck, but eventually calms down and takes his brother home. There, he tells Chuck he thinks the article made him sick, because his condition seems to worsen every time he thinks his younger brother is up to no good. Even though he jumped to Chuck’s defense when the doc proved it was mental, you can tell he’s not entirely convinced it isn’t. And after Jimmy tells Chuck about his plans to get into “elder law” and put Slippin’ Jimmy in the grave for good, the sick old man is magically able to unwrap himself from the space blanket and walk to the kitchen to make coffee.

Back to business for Jimmy. In this week’s nod to pop culture, he fits himself with a suit modeled after Matlock and goes to work drumming up business by putting his face on jell-o cups and campaigning in a nursing home. This little mini-montage oozed of Saul sliminess, with handshakes, one-liners and winks at older ladies.

The end of the episode finally gave us a little more on Mike. Jimmy gives him his card (“Give me a call if you happen to, uh, know of any elders”) on his way out of the courthouse, and Mike takes episode 5 home. A beautifully shot sequence illustrates the secluded life he lives working the overnight shift in his tiny toll booth. When he’s relieved in the morning, he gets breakfast at a familiar diner before giving us a classic inconspicuously-park-outside-a-house-and-wait Mike moment. A woman gets out of the house into her Subaru and pulls out, going in Mike’s direction. She slows down, eventually stops,  and gives him a stare before peeling off. Now we all remember how close Mike was with his granddaughter in BB. This woman was too young to be his wife/ex-wife and obviously too old to be the granddaughter, so my money is on she’s either his daughter or daughter-in-law. Whatever she is, it’s clear they don’t exactly have a healthy relationship.

Mike returns to his home to watch some old movie on an old TV set (no flat-screen like in BB — he must be pre-Gus at this point, not getting paid well) with a couple PBRs. Another knock from the authorities brings our episode to a close. Mike grabs a baseball bat (not a gun, another reason to think this is pre-Gus) before realizing it’s the authorities at the door. Mike opens up and has a curious exchange with a man he clearly knows. “You’re a long way from home, aren’t you?” “You and me both.” Hellooooooo answers about Mike’s past in Philly next week.