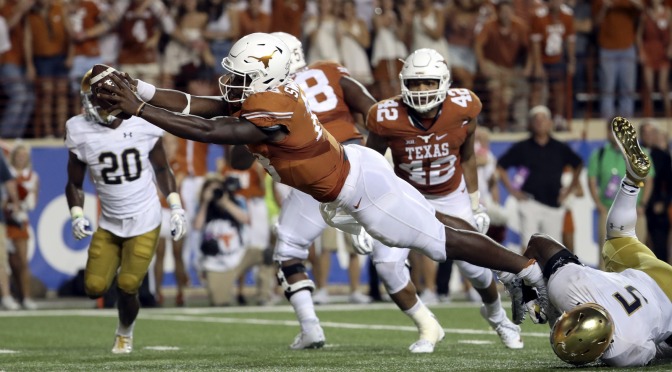 College football is back! The preseason polls don’t mean a damn thing (except for Alabama). Notre Dame is losing heartbreaking games, an Urban Meyer team is scoring a lot of points, double overtimes, drunk fans, Heisman hopefuls, the GameDay crew… WE’RE BACK, BABY. It’s the best time of the year and if you’re like me you watched enough college football to make your eyes bleed this past weekend.

Here is Bottlegate’s weekly Top 10 teams in the country from what my eyes told me. I’ll try and have these up around every Tuesday before the AP Poll comes out once we get back into the swing of things.

Beat a ranked team and a good quarterback in UCLA and Jacob Rosen. After Trevor Knight’s game I wouldn’t be surprised if Katy Perry tries to reignite this lost romance since Trevor and that Duck Dynasty girl broke up. Johnny Manziel is back taking classes in College Station, maybe a little of his Johnny magic rubs off on Trevor Knight and A&M can be the darkhorse of the SEC.  Huge matchup for the Aggies next weekend when they host Prairie View A&M.

Can't believe I got this on video. Best day of my life. @trevor_knight9 pic.twitter.com/AoQPLiVLZI

Some QBs like to slide. Trevor Knight is not one of those QBs. #UCLAvsTAMU #GigEm https://t.co/EG7rQLRDkv

Christian McCaffrey had a very ho hum 166 yards rushing and receiving and the Cardinal beat the Wildcats 26-13. Nothing flashy or sexy but that’s who Stanford is. Plus their former quarterback just joined the Browns practice squad so we’ll throw Stanford in the top 10. Big primetime matchup next weekend vs. a USC team that just got embarrassed.

Nick Chubb is BACK. After 1 week Chubb looks like he’ll be invited to New York in December as a Heisman finalist. I imagine that within a couple games Kirby Smart will name Jacob Eason the full time starter and the Georgia offense will really start to take off once he gets some game experience. Big game vs. the powerhouse Nicholls Colonels next week in Athens.

Notre Dame v Texas was by far the game of the weekend. Do I think Texas deserves a spot in the top 10 after just one game and opening up the season unranked? Not necessarily but winning that kind of game is worth the #7 ranking. One of their quarterbacks also beat the odds

Shane Buechele, on being born after his dad's vasectomy: "I don't know if it's an accomplishment, but I'm glad to be here."

And a note to all you Notre Dame fans- Now you guys can rest easy. ND got their inevitable soul crushing and demoralizing loss out of the way early in the season and you guys can now coast through 2016 without being stressed every Saturday. Their CFB Playoff hopes are essentially done due to Brian Kelly not rolling with one of the best QBs in the country full time.

I still don’t see the hype with Michigan this season because they haven’t been relevant in like a decade on the field… but there’s this Harbaugh guy… and even as a diehard OSU fan I have to be honest with myself- Jim Harbaugh is awesome for college football. I won’t like Jim Harbaugh for that last week in November but I’ll be a fan the other 51 weeks of the year.

In their last two games Houston has beaten Florida State and Oklahoma. I’m admittedly not very familiar with the Cougars but every time I see them on TV they look like they’re having the most fun a team’s ever had. That’s a big component of the Bottlegate rankings.  If Houston stays undefeated they’re getting into the playoff. Barnburner vs the Lamar Cardinals on Saturday.

I don’t care if it was Bowling Green, 77 points is nothing to sneeze at. Mike Weber won’t be Zeke but he showed some signs of being the next big Ohio State running back. This team is athletic and young as hell and should get better game after game. The Bucks host Tulsa next Saturday at 3:30 and will probably win by 30. Oklahoma will be a good measuring stick for this team.

Have a day, @JT_theQB4th. J.T. finished the day responsible for an @OhioStateFB record 7 TDs. Here's all of them. https://t.co/vxtgWip2XB

Clemson almost lost to an Auburn team that went 7-6 last year. Auburn may surprise a few people this year, but this Clemson team that almost won the national championship last season, and that has the preseason Heisman favorite under center has no business almost getting upset by a third tier SEC team.

We saw the Tide absolutely decimate a pretty decent USC team in their first game since winning the national championship last season. Bama would get the #1 spot but I’m biased against the SEC and this wasn’t a true out of conference road game. They’ll probably be #1 in a few weeks however because I think this team is pretty terrifying. Bama hosts Western Kentucky and their giant trash can mascot on Saturday.

After the first half on Monday night I was ready to drop Florida State out of the top ten altogether. Second half Florida State was another story. Deondre Francois and Dalvin Cook have a chance to be the most lethal backfield in college football this season. I think this was the most impressive win of the opening weekend. The Noles will have to learn how to win a game without Jameis Winston giving halftime speeches, however.

HUGE matchup vs the Charleston Southern Buccaneers on Saturday.

The man Deondre Francois was not messing around last night… pic.twitter.com/CgGWYypa0N

Heisman (in no order)

33-for-52 for 420 yards with two touchdowns and no turnovers vs Ole Miss. His Heisman odds are unlisted on Bovada but when they list them this might be a great bet to throw a few bucks on.  Those Freshman Florida State QBs do pretty well.

I don’t expect much movement next week in the top 10 because unlike week 1, week 2 is filled with cupcakes for all of the good teams in CFB.

And someone alert me once Deondre Francois’s odds get listed on Bovada.