Now I’m admittedly not the best person to ask about the ins and outs of the offensive and defensive lines… but I do know that when you overpower and push your man 7 yards backwards like Michael Oher did to that shitty high school lineman in The Blind Side, then you’re doing a pretty good job. I think Danny is going to fit in with this defense just fine.

If Shelton can consistently push offensive linemen backwards and disrupt the backfield, then this defense has a chance to be pretty formidable. Imagine Karlos Dansby or Donte Whitner running downhill to make a hit in the lane that Shelton’s bullrush just created. Just by occupying space, taking on double teams, and moving people backwards, Shelton can free up our Backers to make tons of plays at or behind the line of scrimmage. Karlos Dansby may literally end up with 500 tackles for loss this season.

It wasn’t just one play Tuesday against the Bills where Shelton stood out. It was nearly all of them. He’s powerful, relentless and finishes every play. Shelton is all over the field, he’s loud and even when Buffalo started catching on to how strong and fast he was, he didn’t relent.

Shelton’s rise could be one of the biggest developments for the Browns going into the regular season. He hasn’t played like a rookie and sets up other teammates to make plays.

And there were Bills fans dressed up as large mammals

That's a grown man dressed as a buffalo going to a football game. Be weirder, Bills fans. Be weirder. http://t.co/bgIAbQJvgC—
(@Bottlegate) November 30, 2014

"We're gonna CRUSH these costumes at the game" https://t.co/ZnLS52jiwu

It started off well when Haden put another interception notch on his belt. But then a couple bad plays and a Hoyer sack gave the ball right back to the Bills and we weren’t able to capitalize on it…

Right after the Bills scored their first TD, things went from 0-100 real quick and Terrance West fumbled; Jerry Hughes picked it up; and the Bills sealed the game. Turning point right here.

Hoyer’s day ended after he threw his second interception of the day. Insert some guy named Johnny.

Johnny hit Josh Gordon over the middle for a nice gain

A couple plays later he did this

Sidenote: I ripped my pants after he scored. Literally. My pants got ripped after Johnny Manziel scored his first NFL touchdown.

Wheres Hoyer on the sideline? Why isnt he talking to Manziel? Hes not looking at plays? Were holding him 2 the same ridiculous things right?

My old college roommate and Bottlegate contributor locked eyes with Johnny as he celebrated (that’s him to the left of Johnny’s helmet) #BottlegateWorldwide?

On Johnny’s second drive, he got an early snap, tried to pick the ball up and throw it and was promptly decapitated and killed. 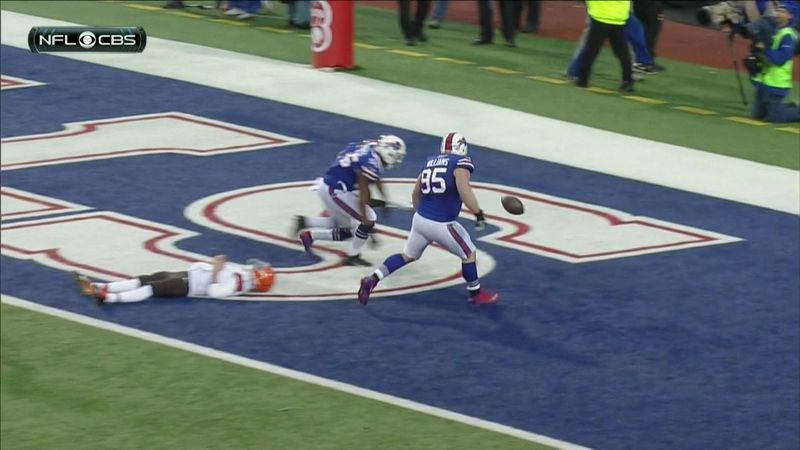 I tihnk it's awfully nice of Manny Pacquiao to keep Johnny Football company. What a nice guy. pic.twitter.com/e3mjyBvpFQ

The game ended and Kyle Orton decided to throw in a dip on the sidelines. This vine we posted went viral and broke the internet, NBD

What was up with Joe Thomas? 3 holding calls? Could have been called for a lot more too.

How late is too late when it comes to signing a new kicker? I don’t trust Billy Cundiff over 35 yards.

Hoyer and Gordon weren’t on the same page all game. I don’t know whose fault that is but apparently the coaches thought it was Brian’s.

I like Brian Hoyer, I really do… But 9 interceptions and 4 touchdowns since the Steelers win isn’t going to cut it. If Hoyer didn’t have the whole “hometown kid” thing going on, I think there’d be a unanimous clamoring for Manziel.

Speaking of Manziel, that was fun, wasn’t it? There’s just a certain excitement when he takes a snap. I wasn’t crazy about him being inserted vs. that defensive front but he looked pretty comfortable directing the offense (sidenote: Merrill Hoge is a jackass). If the Browns hand the reigns to Johnny, I think I’m comfortable with it. We need to get something out of the QB.

I thought the defense played their asses off. Buffalo’s longest run from scrimmage was 8 yards. You’d think that’d be enough to win a game.

Jim Leonhard impressed me. He played solid just as he was expected to do. He’s a “pro’s pro”

How about Joe Haden? Interceptions in 3 straight games; a blocked field goal in this one; and he held Sammy Watkins to 14 yards receiving. Joe is playing at a Pro Bowl level.

Speaking of Pro Bowl, does anyone really stand out as a lock to make the Pro Bowl besides Joe Thomas? If he wasn’t injured I’d say Tashaun Gipson. Joel Bitonio? Haden?

Gotta be encouraged by the youth of our playermakers on offense- Manziel, Crowell, West, Gordon, Gabriel. The future seems bright.

I wish Marqueis Gray was still on the Browns.

At least most of the other AFC North teams lost?

Random thought but I question the decision to run a screen with Jim Dray. I know we gained positive yardage but why not try that with one of our backs or Andrew Hawkins?

I miss you, Jordan.

PS- if you needed to feel worse about the loss, this is the quarterback that beat us.

For every opponent a Cleveland sports team plays, we put together a photo gallery of the other team’s cheerleaders and fanbase. The pics could be funny, weird, hot, disturbing, etc. Here are what the fine fans of the Buffalo Bills look like: