No one ever said it was going to be easy. After blowing a huge fourth quarter lead the Cavs were able to hang on and beat the Bulls 106-101. LeBron had 38, 12 & 6 and ZERO TURNOVERS; Kyrie added 25 playing on 1/2 of a leg; Shumpert and JR combined for 25 points; Tristan Thompson did his thing on the offensive glass per usual; Taj Gibson cried; and Delly clamped down the most vicious leg lock that’s ever been seen on this side of the Mississippi

One more. All we need is one more.

Remember when Joakim Noah had the most basic 2 handed dunk ever and acted like it was a between the legs windmill tomahawk slam? Good times. God I hate his face.

Tristan got conked right in the noggin and then D-Rose picked up the ball and scooped it in. Poor TT.

Joe Thomas made an appearance and was looking dapper as fuck

Joe Thomas is a beast pic.twitter.com/nLvqIBnwMt

And he went HAM when he was pumping up the crowd

Joe Thomas is a PRO at getting a Cleveland crowd fired up for the 2Q!! #AllForOhio 👊 pic.twitter.com/EADohVqucV

When it's your first time playing a competitive game of basketball https://t.co/rYsTrlFoJp

There's a pipe coming down the lane https://t.co/ybbWESEf1N

Man, I love Delly. Just buzzes and buzzes around your face like a mosquito until you’re forced to swat (kick) at him.

I specifically screamed “NOOOOOOYESSSSSSS!!!!” after this shot. If he starts making threes on a consistent basis (big IF right now) it’s going to be dangerous

– Kyrie Irving is a god damn warrior. Playing on 2 nub legs and he’s still able to drop 25 AND outplay Derrick Rose. Unreal, man. The guy has balls of steel. I’ve gained A TON of respect for Kyrie the more this series has gone on.

– Chuck Booms being on Twitter and being unfiltered is just the absolute best (this tweet was comparing Nikola Mirotic and King Leonidas.

I thought this fucker died in the movie 300

He kinda nailed it too tbh 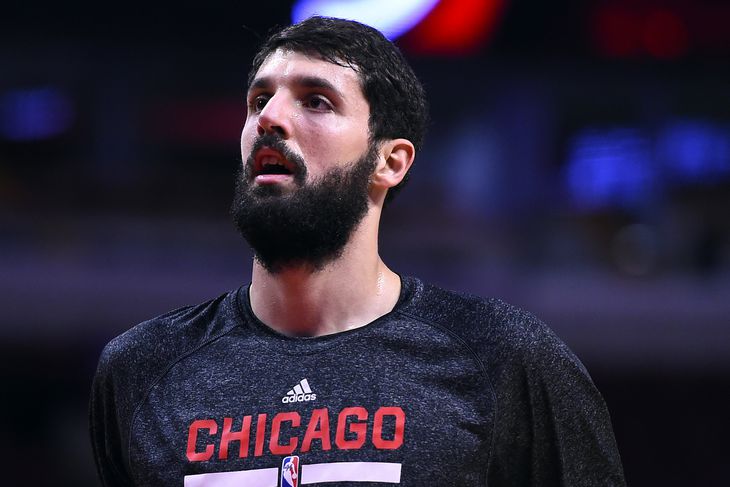 – Posted this pic last night and people WERE NOT a fan of these two kids. The Twitter followers spewed lots of venom their way. Consider this a life lesson to little Timmy and Tommy- When you grow up people will hate your guts if you’re a bandwagon fan.

– NO MORE THIRTY POINT FOURTH QUARTERS ALLOWED BY THE DEFENSE FROM HERE ON OUT, K?

– If I’m a Bulls fan it really chaps my ass to see Kyrie Irving out there lighting it up on a half a leg while Pau Gasol sits on the bench in street clothes because he has a tight hammy. Pau, it’s the playoffs, everyone is hurt.

– Jimmy Butler hitting 3 point shots with under 1 minute in the fourth quarter will haunt me for years to come.

– How about Taj Gibson bitching because he got one of those rally towels thrown at him after he was ejected. A TOWEL. #PrayForTaj

-If you compare Delly’s little leg clamp to Kelly Olynyk maliciously ripping Kevin Love’s shoulder off of his body then you’re a god damn moron. Oh weird, that’s exactly what Mike Dunleavy did.

– It’d be great if the Cavs can close out this series on Thursday. This team needs all the rest and recovery they can get.

– Sucks that LeBron isn’t as explosive as he used to be.

– I’ve officially transferred all my hate from Joakim Noah into Mike Dunleavy. Joakim is so irrelevant right now it just makes no sense to put that much effort into despising him.

See you guys on Thursday.

Get yo limping ass over here pic.twitter.com/CYcIqZBsSc

Huuuuuge game out of Kyrie tonight. 25 points on 2 nub legs is nothing to sneeze about. The dude was in visible pain throughout the game and he toughed it out. Biggest balls on the court bar none. Man tonight feels good. We’ll have more tomorrow in the Wednesday Game Tape.

Don’t forget to snag one

h/t @Kyrie_SIrving for the video