Pro Football Talk– Josh Gordon has a year off from football, so he needed a job.And now he has one. A league source tells PFT that Gordon is going to work as a “goodwill ambassador” for the Sarchione Auto Group in Ohio.He will work in all aspects of the dealership, including selling cars. He’ll also represent them at community events, including for the Wounded Warrior Project.

Huge day for the Sarchione Auto Group. Interesting day for Josh Gordon. From being one of the most exciting players in football and leading the NFL in receiving yards to hustling around a car dealership using terms like “APR,” “back end,” “buyback,” and “laundered lemon.” It’s certainly a fall from grace. But if anyone can do it, I think it’s Josh. It only took him 2 years before he was the best wideout in the NFL. 2 years from now, he’ll be like Jeremy Piven from “The Goods” (underrated movie) running around the place selling Lemons and landing that Three Pounder (that’s car salesmen lingo FYI).

Josh is going from this:

In all honesty, this is a good thing for him. He’ll get to spend some time away from the game and hopefully realize just how good he has it. A year of working 40 hour weeks and having to depend on commission checks should open up his eyes. One more failed drug test and he’ll be living week to week depending on that paycheck just like the rest of us.

Or maybe he wants to fly his favorite escort (ALLEGEDLY!!) up to Cleveland a few more times during his suspension. I can imagine things probably get pretty lonesome being away from your teammates for a full year.

By now you’ve heard every sports take on the planet in regards to Josh Gordon and his suspension. The ol’ “Hit Mary= 2 games. Hit Mary Jane= 1 year.” I admit I’m fired up about the whole situation. The NFL handled this situation so poorly it makes your head spin. But that’s the way the NFL operates. It’s so far out of touch with reality. No common sense. Roger Goodell just walking around the NFL offices with a big dump in his pants all day. The common fans of the NFL may shrug off Fuhrer Goodell’s actions, but not I! No sir, I will not stand for it because I am an American in the United States of America. And being an American in the United States of America it says somewhere that you have the right to petition. And that’s just what I’ll do.

Press play and continue reading. Let the music build a little bit though

I hereby demand Mr Obama and friends reinstate Josh Gordon and strip Roger Goodell of his commissioner duties immediately. I won’t stand for his tyranny any longer! But I can’t do it alone, I need your help to have our voices be heard! This is not the America I was raised on! The America I grew up with didn’t allow dictators. The America I grew up with showed videos on MTV. In the America I grew up in you were treated fairly and with respect. My two grandfathers didn’t serve in WWII to see this sort of autocracy threaten the very thing we hold near and dear to our hearts; our FREEDOM!

I NEED this @GVArtwork T-shirt 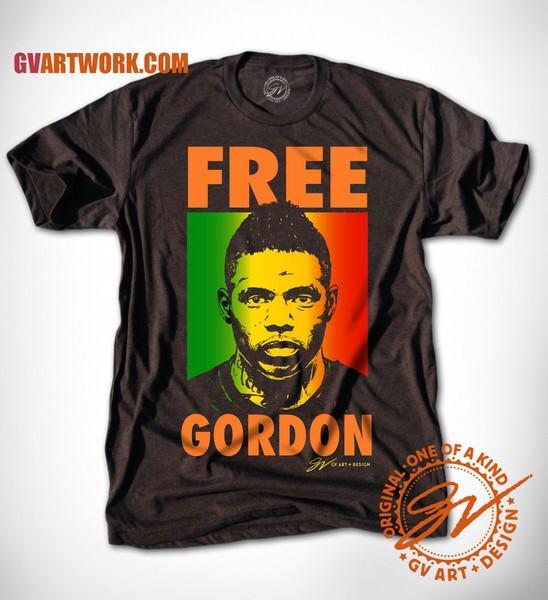