From CBS Sports –  “If you’re the Steelers defense you want No. 2 to walk out on that field. You want him on that field,” Hoge said. “He has no business being on the field right now. This is the one thing that probably burns me more about the NFL more than anything, is when a player like Johnny Manziel is drafted based on hype and excitement, not a true football skill.

“He really had no business being drafted in the first round. When I was doing the draft and I was going through and studying him. I actually got done and it’s the first time, aside from when Tim Tebow came out, there’s nothing, nothing he does that transitions to the National Football League. There’s not one skill set he had where you say ‘Gosh he’s a first-rounder.’ Really nothing.”

Hoge continued to go off on Manziel’s text to coaches about wanting to “wreck this league” and then concluded on the lengthy interview (after a diatribe about Jerry Jones and theDallas Cowboys) by predicting the “saddest, quickest ending” to an NFL career “in quite some time.”

“This will be the saddest, quickest ending we’ve seen in quite some time. It’ll be like a Tim Tebow,” Hoge said. “He is exciting. They keep coming back to it, and I go that’s great but it’s not a skill set that transitions in our league.”

So ESPN’s Merril Hoge had some comments about Johnny Manziel. Those of you that know me, probably know my exact feelings after reading this.

But I’m not gonna get mad. I’m going to take a couple deep breaths and I’m going to calmly talk about the aforementioned Merril Hoge.

I’m not going to sit here and defend Johnny Manziel from this idiot because that’s just getting tiresome… But what I will do is drag Merril Hoge’s name through the mud and show what a fraud he is. Time and time again he’s been incredibly wrong in prior statements he’s made. Seriously, I haven’t the slightest clue why he’s actually allowed to state his opinion in a public forum and why ESPN continues to keep him under contract. Unlike Skip Bayless (who is a professional troll) Hoge’s tiny little brain actually thinks what he’s saying is right. Well Merril, good thing I’m here to keep you in line.

Merril on the best QBs in the NFL 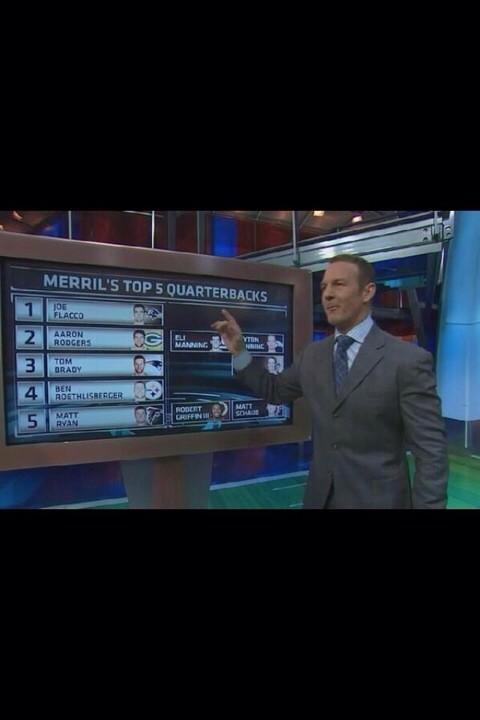 Yep. Nailed it. Especially the no Peyton Manning or Drew Brees part.

Rodgers lacks anticipation and waits to see a route come open, Brohm throws it with anticipation, that’s a huge advantage

This tweet that has since been deleted by ESPN

Sure, I would also rather have a 7th round pick who barely made a practice squad over arguably the best prospect in the last decade.

Merril also wears his ties like this. On purpose.

Now this I especially just don’t understand. I don’t know if he’s trying to make this his thing or if he genuinely thinks this is a good look. Also, Merril, I think your face is stupid.

And these are just a few statements that Hoge has made. It’s truly amazing how someone can actually get paid to give their opinion to the world while being so consistently inaccurate time and time again. His analysis is crap and is easily one of the most disliked people at ESPN. At this point though I don’t even know whether to be mad or to just laugh at the Factor Back.