It’s that time of year again.  The beginning of the magical ride that is the NBA season.  Being that this is Cleveland, the beginning of a new season (whether it be Cavs, Indians, or Browns) usually means a time for blind hope that maybe enough balls bounce our way or enough miracle plays are made that we finish just over .500 and contend for a playoff spot.  Not this year. Not with this team.  As we’re all very familiar, LeBron James returned to Cleveland last offseason along with reinforcements.  As the season played out we saw him carry our team all the way to the NBA Finals.  We finished the year two wins away from the Championship that has eluded our city for so long. Now consider that we did that missing 40% of our starting lineup and two of our three All-Stars.  Nonetheless, our offseason started two games too soon.

This offseason was quite different than last years.  By comparison, it was quiet, it was calm.  The calm before this year’s storm.  This year’s Cleveland Cavaliers are going to be a force of nature that the league isn’t going to be ready for.  This year we’re coming in with expectations of rings, and trophies, and parades.  And dammit, I cannot wait!

With that being said, welcome to Bottlegate’s Cavs Season Preview, we’re going to cover: additions and departures, team depth, concerns (not many), predictions, and whatever else comes to mind as we go.  My advice for the post and the season. Enjoy the ride.  It’s gonna be fun.

This offseason the Cavs added some new faces, some old faces and even a new, old face.  Joining the 2015-2015 team are Jared Cunningham, Richard Jefferson, Sasha Kaun, and Mo Williams (again).

Mo Williams: Great to see Mo back in Wine and Gold.  He fits perfectly into the backup point guard role we really needed last season.  For everything Delly gave us, (literally everything he was physically capable of) offensive efficiency was not one of them.  Mo Gotti proved he can still fill it up based on his 52 point explosion against the Pacers last season.  He’ll be reminding us of that all season and hopefully not just with the 52 on his jersey.  I expect solid production from him now that he’ll be our 5th or 6th scoring option instead of the 2nd fiddle he played to LeBron in his last stint in Cleveland.

Richard Jefferson: Never thought I’d see the day Richard Jefferson would don a Cavs uniform.  More than anything that’s because I thought he retired like three years ago but after further investigation I can confirm he didn’t.  As it turns out, RJ has kept himself in fantastic shape and has aged like a fine wine. He has dramatically improved his 3-point stroke over the years.  He shot 43% from three as a Dallas Maverick last year and also had one of the dunks of the year. No way was this an offensive foul!!! 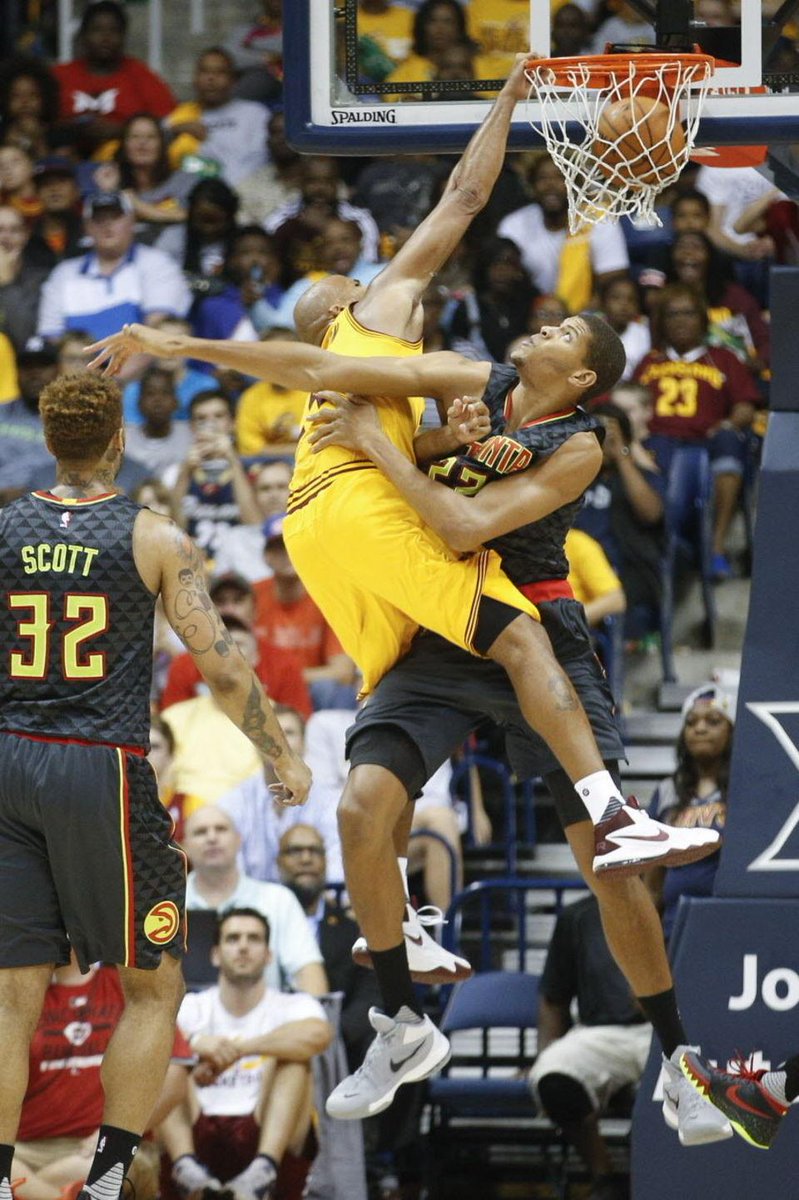 He’s going to give us WAY more than Shawn Marion ever did and will go a long way in allowing LeBron to log some minutes on the pine which will matter come playoff time.

Sasha Kaun: He’s 7-foot+, has been playing pro ball overseas since he left Kansas years ago, and he’s got some familiarity with David Blatt.  The last big man who joined the team with some familiarity with Blatt (Mozgov) has worked out pretty OK if you ask me.  Oh and he’s 7-foot.  Big step up from Brendan Haywood as the 5th big.

Jared Cunningham: When I saw we added Jared Cunningham to our training camp roster I recognized his name since we actually drafted him a couple years back.  He never put on a Cavs jersey since he was immediately traded as part of the Tyler Zeller deal though.  He was a total afterthought until I checked a preseason box score and saw he dropped 31 on somebody.  Yes, it’s only preseason but it got my attention and as I’ve kept my eye on the young guard I’ve like what I’ve seen. Was glad to see he made the roster in the 15th spot.  He won’t play much but I think he can hold his own if, god forbid, he ever needs to.

Shawn Marion:  Still a mystery to me why he sucked all season last year.  I’ll blame the (phantom?) hip injury. He’s now retired.  Sadly Shawn, I won’t miss you too much.

Mike Miller:  Mike couldn’t really shoot last year but he hustled and was a great role model for guys like Kyrie and Tristan. No one celebrated on the bench like Mike Miller. In a perfect world I’d love to have him on the team as an assistant coach kind of like Giambi was for the Indians during the Wild Card year… but I’d rather have a body who can play playoff minutes without hurting the team.

Kendrick Perkins: He will forever be a legend for this play. Miss you Perk.

When healthy, the Cavs might be the deepest team in the league.  Looking at the (unofficial) depth chart above I see 12, maybe 13 names I’m 100% comfortable playing at least 15 minutes a game.  That’s a HUGE step up from where we ended last season when we could only have 6 or 7 guys play during the Finals without allowing a 20 point run.  We’ll get to the “when healthy” part next, but I’m looking forward to seeing what Coach Blatt does with the lineups early in the season.  Sure I’d like to see us play our top 8 guys all year and go 73-9 and have the best regular season of all time, but not as much as I’d like us to play 13 deep into the bench all year and then go 16-0 in the playoffs with a healthy, fresh squad. My dream lineup I’m hoping we see a lot of is Kyrie, Mo, JR, LeBron, and K Love.  The firepower on the court with that lineup is such an embarrassment of riches it would make Scrooge McDuck blush. If we can keep the big three all below 33 minutes a night and still win 60% of our games and get a top 3 seed we’re going to be a nightmare for anyone we play come April, May, and most importantly June.

Ok seriously though, the one and only concern for this team and this season is what will hereon be referred to as the H-word. Health.  If we can stay H-word-y all season, it’s a wrap, might as well not even play the games.  Just give us the trophy. (Being a cocky Cavs fan is fun)  Seriously, how nice would that be though…. But in reality, we aren’t even going into the season unscathed.  We’re starting the year without Kyrie Irving as he recovers from his kneecap fracture in the Finals, and Iman “my daughter is also going to be named Iman” Shumpert. Sidenote, go look at the “Shumpman” Knicks highlight that the King of the Flattops posted on Instagram this week. GOOD GOD could he get up before he tore up his knee…  Missing two of our top 8 guys to start the season obviously isn’t ideal but I will say I’m happy that Delly will actually get to see the floor and log some minutes until Kyrie returns.  He deserves it after the Rudy-like performance he gave us in the playoffs.

I kind of look at Delly’s early season minutes like how Cardale got to come out and do his victory lap starting for the Buckeyes after he played his ass off for OSU and won a ‘ship last season.  Sure, we’re still going to win a lot of games with Delly getting minutes but things will really start humming when Kyrie gets back and runs the offense like JT now is for the Bucks.  Come to think of it, this year’s Buckeyes and Cavs have a lot in common but that’s probably a whole separate article for Mike to write next week or something or never at all.

Reasons the Cavs will win the NBA Finals:

Kevin Love’s body issue. So beautiful. The only way to improve that body is to see it holding a Larry O’Brien trophy.

JR Smith’s pipe is monogamous. No really, JR Smith got engaged this offseason. Imagine how well he’s going to play when he’s focused on the game and not the dime in the 3rd row. He put a ring on her, and now the Cavs are going to put a ring on him.

Tristan Thompsons girlfriend. She’s going NOWHERE after that deal.  Now I know why he held out for that extra $2 mil. Definition of a championship girlfriend.

Anthony Bennett is skinny again.  This directly affects the Cavs exactly 0% but it’s hilarious to me and is basically a miracle so it has to mean something. Cavs in 4.

David Blatt LOVES Townhall.  If you want to meet Coach Blatt just spend two hours at Townhall on any Saturday. Doesn’t matter what two hours.  If you’re there, he’ll be there. And Townhall is definitely Championship food and beverage.

Kyrie is a dad. Not just is Kyrie a dad, Kyrie is a dad with an absolute firebomb for a baby momma.  Kyrie isn’t going to let his first born come into this world without a championship ring to show him.

This guy deserves it

We’re going to close out this year’s Bottlegate Cavs Preview with a cry for action.  I’m going to be starting and leading a small but important movement here.  There is a certain player in the league that all of Cleveland should revile and despise.  He has a very annoying, not-really-as-cute-as-everyone-says daughter, he has the muscle definition of a 15 year old trumpet player, and makes an occasional three point shot from time to time.  He doesn’t go by his first name and uses his middle name, which is really a girl’s name. His shoe deal isn’t even with Nike.  And he supposedly plays point guard but wears the number 30.  For whatever reason, the media is trying to force him upon us but I for one will not have it!  Beginning today, I will not once refer to this player as “Steph Curry” for the duration of the season.  He will only be known as “number 30 for Golden State.” The only acceptable variation of this is “#30 for Golden State.”  I implore all of you to join me.

One thought on “Your 2015-16 Cleveland Cavaliers Season Preview; This Is The Year”