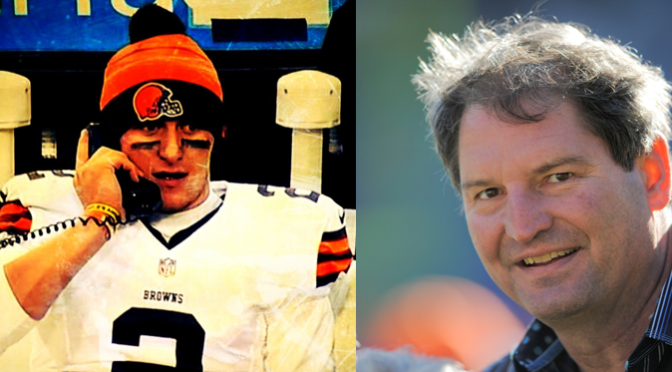 Bernie Kosar has reached out to Johnny Manziel in hopes of talking to the troubled Cleveland Brownsquarterback.

“I’m embarrassed to even tell you how many times I tried,” Kosar, the beloved former Browns quarterback, told USA TODAY Sports on Tuesday. “I have tried to call him directly 18 different ways. If he chooses not to talk to me, that’s his choice.

“I’m not mad at him. But there’s a point where there’s an element of respect that’s involved.”

I’ve lived in Cleveland for 27 years aka my entire life. If I’ve learned anything in those 27 years it’s that in this town you don’t piss off LeBron James or Bernie Kosar. Two of the most beloved and well respected athletes in our Northeast Ohio community.

Well, our boy Johnny Football has managed to piss off both within like 2 months. First LeBron dropped him from his marketing firm LRMR last week for being a shithead (Nike might drop him too). Now Bernie Kosar says Johnny is ignoring him and blowing him off on purpose.

I get if you don’t feel like talking and you ignore phone calls and texts from your mom… but Bernie Kosar? The man who has lived through being a quarterback in Cleveland and can actually give you real world advice that could undoubtedly help your career? Who’s one of the icons of Cleveland Browns football and has dealt with his own personal issues that Johnny seems to be dealing with? Out of everyone in the world why would he ignore Bernie?

I get that once Johnny gets cut that we’ll pile on him after he’s gone. But really though, has any athlete in Cleveland had a faster fall from grace than Manziel? Just 3 weeks ago he was playing football against the Chiefs and set a Browns record for most rushing yards by a quarterback in a game. Now he’s become a national punchline and is losing business deals left and right. Not the journey of more success. It’s almost kind of sad but it’s his own fault.