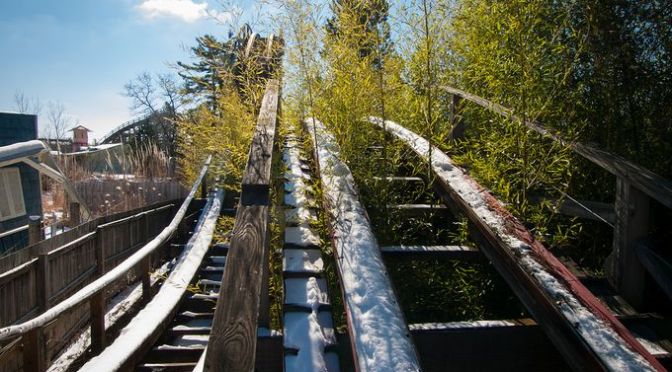 One of the best parts for those of us growing up in the Cleveland area was having Geauga Lake/Six Flags right in our backyard in Aurora. I remember spending days upon days there during the summer months, taking school field trips there, and going in the fall for their annual Halloween Haunt/Fright Fest. Well, that is until 2007 when it closed its gates forever.

If you ever visited Geauga Lake, I highly recommend reading this article by Theme Park Tourist. If you don’t have 20 minutes to kill, here are the Sparknotes:

– Geauga Lake was founded in 1887 and started out as a picnic meadow before it was soon home to a ballroom, and a steamboat that hosted dance parties on weekends. In 1925 the Big Dipper opened and it was the fastest and tallest rollercoaster of its time. Yep, the Big Dipper was its generation’s Top Thrill Dragster.

– Sea World opened across the lake in 1970. Shamu and co. were located only hundreds of feet from Geauga Lake.

– Geauga Lake was bought by Premier Parks in 1995 and they added Mind Eraser and Grizzly Run.

-In 2001 Anheuser Busch (the owner of the adjacent Sea World) wanted to buy Six Flags Ohio. It would have probably been branded “Busch Gardens, Ohio” but we’ll never know. Six Flags countered Sea World’s offer and bought Sea World for $110 million. Sea World would be combined with Six Flags.

-The park opened up as Six Flags World Of Adventure in 2001 and became the largest amusement park in the entire world. Amazing. Largest in the world. I had no idea.

– In 2004, 4 years after the park was called Six Flags and 3 years after it combined with Sea World, Six Flags Worlds of Adventure was purchased by Cedar Fair Entertainment Company. The same people who own Cedar Point. They changed the name back to Geauga Lake and eliminated everything having to do with Looney Tunes or Marvel characters. If that wasn’t enough they also changed the names of all the popular rides and rollercoasters.

– Cedar Fair wanted nothing to do with animals so the Sea World side of the park was left with only stupid climbing nets, a 4D simulator and boring rides.

-The park changed its name in 2006 to Geauga Lake and Wildwater Kingdom and everything started going to shit.

-The park removed X-Flight and Steel Venom (Superman) from the park in hopes to give off a more local and family feel to the park. Or so they say. Everyone knew that getting rid of 2 prominent rides lessened competition with Cedar Point. The main takeaway I had from this article is that Cedar Fair really sucks.

– In 2007 the park shut down the Raging Wolf Bobs at the beginning of the season and eliminated the spring and Halloween events and closed on September 16, 2007.

-Five days later, FIVE DAYS, Geauga Lake closed it’s gates for good. “There were no goodbyes. No last rides. No apologies. No final tours or memorial events. No last chance for photos. Nothing.”

– Six years after becoming the largest park in the world, Geauga Lake was reduced to just one little rinky dink waterpark. Cedar Fair said this was best for business. No more competition to Cedar Point. Dicks.

– Geauga Lake wasn’t just closed. It was scrapped. Any relocatable coasters were moved, finding new homes at Kings Dominion, Carowinds, and Michigan’s Adventure. Flat rides, too, found their way to the chain’s other parks. The Villain – just seven years old – was scrapped. So was the Raging Wolf Bobs coaster. That’s all expected. But everything from food stands to gift shops were ransacked and cut to their foundations. Obliterated.

-The only remaining attraction at Geauga Lake today is the Big Dipper. There aren’t even any bathrooms still standing. 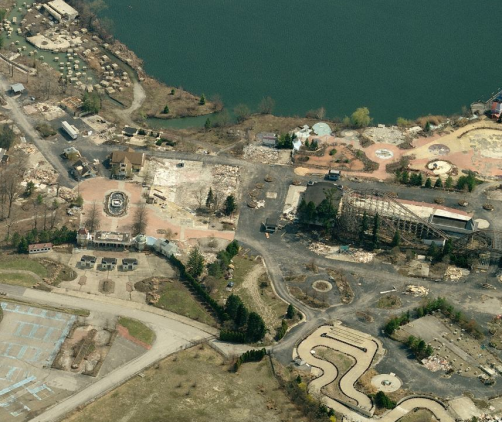 – But that’s all good. At least there are some sick waterslides left.

– So if you’re keeping score at home, the biggest park in the world: 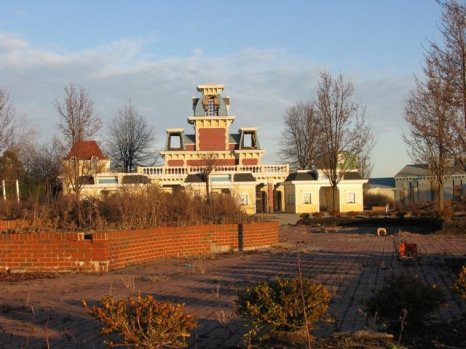