Wow, @Bzimmer5 @ClintFrazierr & Yu Cheng Chang starting tonight at Goodyear. Great news for those who are interested in the future of CLE. 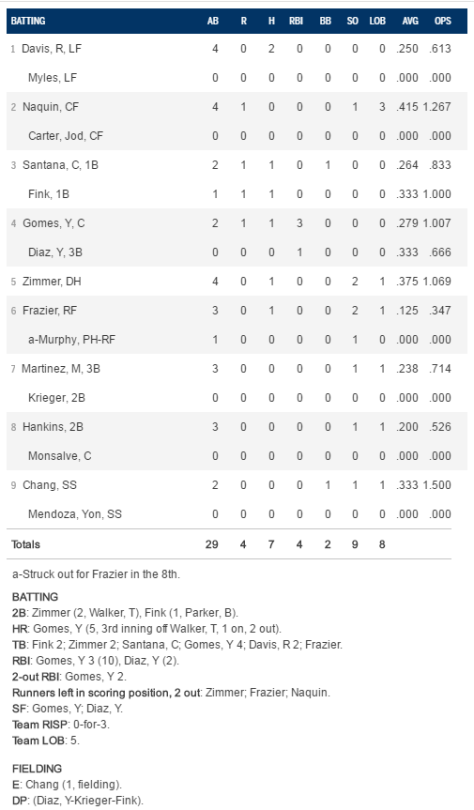 The numbers on the back of their jerseys may have added up to 249, but those weren’t just any minor leaguers running around with Chief Wahoo on their sleeve last night. An outfield of Clint Frazier, Tyler Naquin and Bradley Zimmer (first-round picks in 2012/13/14) is something we’re very likely to see over the next year or two, and will certainly be met with a spike in the number tents erected inside and in surrounding areas of Progressive Field in downtown Cleveland. Naquin has obviously already made the big league club this season, Zimmer seems to be a lock for Opening Day 2017 before even playing in a single game this year, and Frazier isn’t all that far behind him. The “Indians can’t draft” crowd (first cousins to the Dolans R Cheap clan) may not like to admit it, but when your outfield of the future includes three consecutive first round picks (and the two top prospects in your entire system) with that much upside, you’re doing something right.

That being said, last night wasn’t a particularly explosive showing. Against Mariners fourth starter Taijuan Walker, Frazier singled in the first and Zimmer doubled in the third. For the spring, they’ve both had 8 at-bats at the big league level. Frazier (21 years old) has 1 hit and a 5/1 K/BB, while two of Zimmer’s (23 years old) three hits have been doubles and he’s also driven in a run. Naquin (24 years old) really isn’t doing much of anything other than leading the regulars in hitting (.415 in 53 ABs) and triples (3), second in bombs (4), driving in 7, doubling three times and posting an OBP of .456 in his first extended action against big league pitching.

But what about Michael Brantley? Who? Who’s on first. Who, meet Michael Brantley. He’ll be taking your job in the near future. While he’s never played first base in a big league game, he did dabble in the minors and the idea was tossed around in the spring of 2011. Defensive metrics have never loved him as a left fielder, and a move to the infield would certainly help to keep him healthy and his legs fresh as he enters his 30’s. He would also provide a well above average bridge until Bobby Bradley (who DHed in the first game yesterday) is ready for the big show. Bradley hits baseballs hard and he hits baseballs far, but he also fails to connect on quite a few attemps at hitting baseballs and is only 19 years old. He’s a ways away from The Corner.