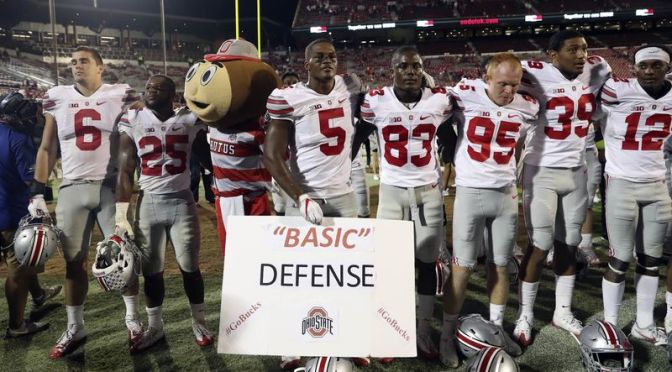 A wild week 3 is in the books and Alabama has been dethroned as the best team in the country, Notre Dame is dead, and the Big 10 is the best conference in college football.

Is Miami deserving of being the 10th best in the country? Nah, probably not. But maybe though… however, any school that drops these unis in the middle of the season is top 10 material in my book.

They have a bye this weekend then travel to play Georgia Tech on October 1st.

They put a beatdown on Texas State and travel to Texas A&M in what is probably one of the better games of the week.

Texas A&M is quietly flying under the radar in the SEC while having 2 pretty solid wins- vs. UCLA and on the road at Auburn. Huge test this weekend when Bert and the Razorbacks invade College Station.

Jabrill Peppers is good. We all know that Michigan will probably start off the season 7-0 but it’s all about style points right now, however, and they were getting smacked around by Colorado for a little bit last Saturday before realizing they were playing Colorado and winning 45-28. They host Penn State on Saturday.

They were beating South Carolina State so bad they had to shorten the quarters to 12 minutes.

Wait, what? @ClemsonFB just scored one of the strangest touchdowns you'll see this season… pic.twitter.com/9oS1q2f6fe

They travel to Georgia Tech on Thursday which’ll be a sneaky tough test for the Tigers. A short week compounded by trying to defend that stupid Mickey Mouse Wing T offense makes this a pretty intriguing game. I still haven’t been overly impressed by Clemson this season but they can make a little statement vs the Yellow Jackets on a nationally televised game.

Every time you want to write off Michigan State, Mark Dantonio wins a big game. He’s literally the .gif where The Undertaker sits up in his coffin.

They were up 29 points on the road at Notre Dame and held on to beat the Irish 36-28. They start their Big Ten play this Saturday when they host AP #11 Wisonsin. Should be a good one.

Houston went on the road last Thursday and struggled a bit against Cincinnati. Then all hell broke loose and the Cougars ended up winning 40-16. Houston’s win over Oklahoma seems a little less cool now after what Ohio State did to the Sooners last Saturday but we’ll keep them in the top 5 nonetheless.

Finally Alabama got that Ole Miss monkey off their back after losing to the Rebels the past 2 seasons. At one point they were down 24-3 but somehow ended up beating Ole Miss 48-43. They were up 18 in the 4th quarter and didn’t end up covering the 10.5 point spread. For that I should drop them out of the top 10 altogether.

They host Kent State this Saturday. Thoughts and prayers, KSU.

By far the 2 most impressive teams last weekend. Louisville dropping 63 points and beating Florida State by FORTY THREE and Ohio State rolling to a 45-24 win at Oklahoma which was more of a blowout than the score indicates. Both teams are led by dynamic quarterbacks who most likely will be Heisman finalists.

Oh, and the Buckeyes proved that they are definitely not basic

Stop us if you've heard this one before: Lamar Jackson: Touchdown. #SidelineCam https://t.co/gvRFnNuVC4

Louisville plays at Marshall on Saturday and Ohio State has a bye and hosts Rutgers on October 1st.

Heisman Frontrunners (aka Lamar Jackson and everyone else)

Has 291 rushing yards and 3 TDs and 11 catches for 113 yards and a TD. Sucks that he plays on the west coast and we don’t get to see most of his games.

10 passing TDs and 3 rushing TDs on the season and QBs the co-best team in the country. Assuming OSU makes the Big Ten Championship game, JT is going to finish with around 56 total touchdowns this season. Unfortunately if the guy ahead of him keeps playing the way he is, JT might not have a shot…

No brainer here. Quite possibly the most dominant player in the country right now. Put up 63 points vs. a good Florida State team (it could have been more) and has 18 total touchdowns. If the Heisman voting ended today he’d win unanimously.