“An inmate who walked out of the Ashland County Jail early Friday by lying to jail security is back in custody.
Ashland County Sheriff Capt. Steven Blake said police in Lexington, Kentucky captured Jeremy M. Williamson, 34, after Blake called a relative from a Speedway gas station there.”

“Williamson changed out of his green prison uniform on Friday and into blue pants and white shirt that signifies someone going to do community service.

Williamson told the guard he was ordered to do the community service about 6:20 a.m. and walked out of the jail.

Williamson was on community service duty in August.”

What. In. The. Fuck. is going on with the Ohio Department of Rehabilitation and Correction right now? A week after the most hated piece of shit in the entire state escaped from prison by CLIMBING A FENCE, this cat pops off his green skivvies, puts on blue pants and a white tee and walks right out the front door of the place. Are those not like the first two escape plans outlined in the handbook for prison guarding? “Step 1: While inside the prison, do not let prisoners walk out of the front door. Step 2: While outside the prison, do not let prisoners climb any fences.” Literally the only place these scummies can go in those two situations, aka the only two situations they’re ever in. I just can’t wrap my head around it. Fuck “The Birthplace of Aviation”, I’m rolling with “The Place to Be if You’re Incarcerated”.

Another article from Cleveland.com considers whether budget cuts are to blame for the recent events. I’m not gonna sit here and pretend to be some expert about correctional facilities and state budgets, but I’m pretty fucking sure it’ 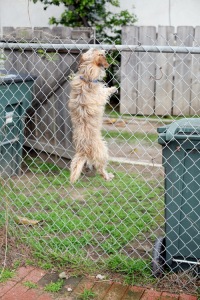 s not a good idea to start pulling staff from guard towers like they have at Allen Oakwood. The fact of the matter is that the amount of work to do in prisons is staying the same, if not growing (these guys are starting to adapt, climbing fences and walking), while the amount of guards to do the work is decreasing.

Toward the end of this long ass article, they suggest a possible solution for prison over-crowding is sending less people to prison. Building new facilities, expanding old ones, hiring more guards, that’s all expensive. I get that. But are we seriously going to say our correctional budget should determine our laws? We can’t afford to hold these guys so Bobby, who is a non-violent offender, is cool now? Air tight logic. Maybe you should ask him nicely for that fifty grand he embezzled and pump it right back into the prison. I could get down with building some less-secure facilities for prisoners like that, which I’m assuming would be cheaper, but they’ll probably go and try to walk out the front door anyway.