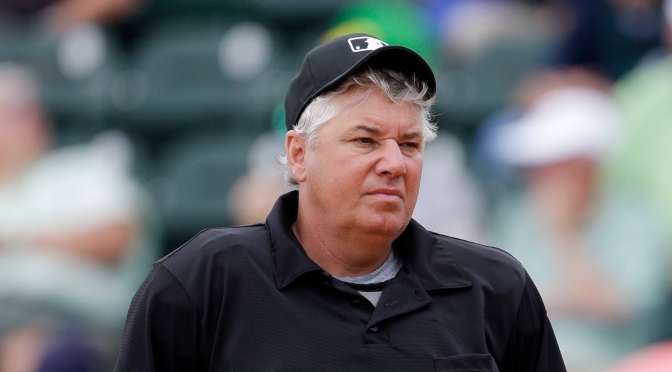 Let’s get this out of the way first. Danny Salazar imploded after that missed strike 3 call in the third inning. It was unacceptable, no doubt about it. Gotta have thicker skin. That being said…

Tommy boy had one for the ages last night. Just bad, really bad, all night long. If you don’t follow @IndiansUmp on the Twitter yet, you should probably get on that. I have zero idea who runs it or where the information comes from but it basically tweets out every time an ump blows a ball/strike call in a Tribe game. Whether it favors the good guys or the opposition, it almost instantly fires off a tweet with a picture of the strike zone, pitch location and a few other stats. Here’s the big turd Hallion laid on Salazar’s doorstop in the third:

Are you shitting me?

There’s one of these “umpire” twitter accounts for all MLB teams (and by all I mean there’s one for the Indians and Twins and I’m not checking the rest). Last night, the Indians account tweeted out eight blown calls, three of which screwed us. Obviously the opposite is true for the Twins. Here are some of the other eggs he laid:

Oh f*** you dude. That should be ball four (and it is, 84% of the time), giving us runners on first and second and Lonnie coming up to give us a chance to take the early lead. Boooooooooooo!

WHAT?!?!?! This is the worst call in the history of balls and strikes in Major League Baseball, right? NINETY-EIGHT PERCENT of the time Brian Dozier is sent back to the bench on this pitch. 98. There’s no part of that ball that’s even sniffing anything but the grapefuit. Just historically bad. Jesus Christ.

Again, I’m not making an excuse for Danny last night. He’s gotta be better than that. But sweet onion chicken teriyaki, so does the home plate umpire.

Hallion DOES have a sick punch out but I hate him and refuse to give him credit for it.

Against Yanny there, too. Lolz.