I like to poke around these prospect lists every once in a while but apparently I missed this little development (h/t to Reddit user chuckyjc05). With Mets outfielder Michael Conforto graduating from rookie status (more than 130 ABs / exceed 45 days on the active 25-man roster), your Cleveland Indians now have two of the top 10 outfield prospects in all of baseball according to MLB.com. 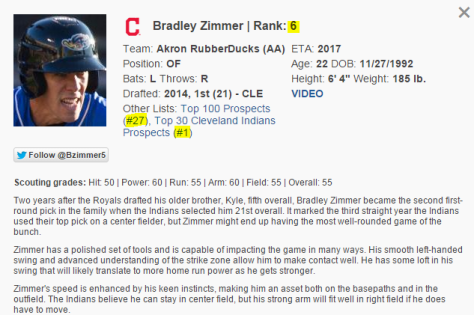 You’ve definitely heard of these two kids before if you’re anything more than a casual Tribe fan. Zimmer got up to AA Akron towards the end of this year, amassing just over 200 plate appearances for the RubberDucks. While his triple slash left a lot to be desired (.219/.313/.374), he’s still just 22 years old and his BABIP of .273 was way below where it’s been at other levels where he’s gotten significant ABs, so that should stabilize in 2016. Before the call-up, he was raking in High-A Lynchburg alongside Frazier. In 78 games he hit .308 with 10 bombs, 39 RBI and 32 swipes. He also scored a whopping 60 runs. He was third in the Carolina League in stolen bases and eighth in both runs and home runs despite not playing the entire year there.

Even though he was drafted a year earlier, it was out of high school so Frazier is still a little behind Zimmer developmentally, hence his lack of a call up to Akron. It certainly wasn’t due to a lack of production. Here are his totals and ranks in the Carolina League this year:

Here’s a good story on him from earlier this year courtesy of Justin Lada (@JL_Baseball). He’s still learning how to adjust both mentally and mechanically, things he never had to worry about in high school, but my goodness that swing is something pretty.

The Tribe also had two other guys show up on MLB.com’s top 10 prospect list at their respective positions. First baseman Bobby Bradley, who led the Midwest League with 27 bombs (11 more than the #2 guy) and 92 RBI.

And LHP Rob Kaminsky, who we got in what was widely recognized as one of the best trade deadline deals this season when we sent Brandon Moss to St. Louis. 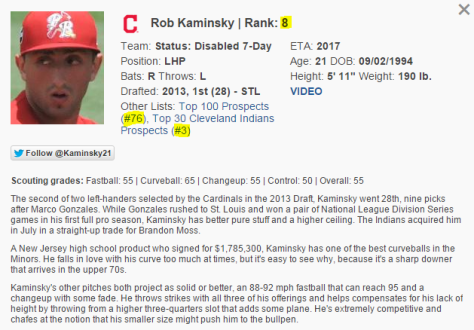 Notice how that snippet says Kaminsky has better pure stuff and a higher ceiling than Cardinals starter Marco Gonzales, who won two NLDS games as a rookie last season. So that’s pretty cool I guess.

It might not seem like it right now after the boys droped the first two games in Minnesota with the season on the line, but there’s a lot to be excited about down on the farm.