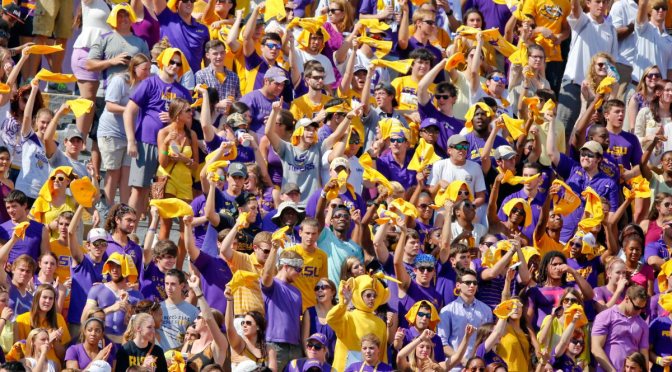 “New York is about to get a dose of SEC football and some at LSU are not sure they can handle it.

This weekend the LSU Tigers will make the trek up northwest to take on Syracuse in the first of a home-and-home series. (Syracuse will play at LSU in 2017). Syracuse has a historic basketball program, but despite a lenghty list of big names; their football program clearly takes a backseat. The passion of SEC football is unrivaled in college sports and count a VP of the LSU Alumni Association as one who is skeptical if Syracuse can handle what’s about to hit them.

Jason Ramezan said LSU sold out its full away-game allotment of tickets, requested more tickets, and then sold out of those. He estimates that 7500 LSU fans will be on campus at Syracuse despite them just having about 5200 tickets. He also is worried that the Syracuse faithful won’t have enough of the “beverages” that Tigers fans love and wants them to be prepared. Here is what Ramezan said in an interview with syracuse.com after scouting the area last fall:
“I’ve gone places in the past where they’ve run out (of alcohol). They might meet their alcohol budget for the year. Tailgating at LSU is a science and it’s a religion, and in the fall, it’s almost better than the game…When we went up there we said, ‘Oh this is going to be interesting. There is not a lot of space.’ It’ll be different.””

Tell you what folks. Cleveland has a lot of problems. Pot holes, road construction, crime, poverty, our sports teams sucking and just general depression. I love this city but we’re far from perfect. However if there’s one thing I would bet all my worldly possessions on never happening in Northeast Ohio, it’s a shortage of alcohol. There’s a better chance of this area running out of air than running out of booze. Always another bottle in the back.

As for this story, it’s absurd and there’s absolutely no possible way Syracuse would run out of booze from one day of tailgating. Don’t flatter yourselves, LSU fans. Now if it was a Big Ten school visiting the Carrier Dome?

That could be a problem.