NORTH RIDGEVILLE, Ohio – Just before 5 a.m. Friday, North Ridgeville officers got a call about a kangaroo roaming down Lorain Road near Stonebriar.

Three officers responded and were able to get the kangaroo, named Foster, back into his pen on Island Road.

No officers were injured while corralling Foster back into his pen.

Officers also said that yes, kangaroos are allowed in the city with the correct permits.

If we’re being honest, I’m pretty disappointed in the North Ridgeville police department. They robbed Northeast Ohio of having the chance to go full blown Jumanji. Kangaroos, zebras, rhinos, monkeys, and elephants running through the streets of Cleveland would have been AWESOME. Maybe bring Robin Williams back from the dead? As long as that little annoying kid who’s turning into a monkey doesn’t come. That kid sucked. 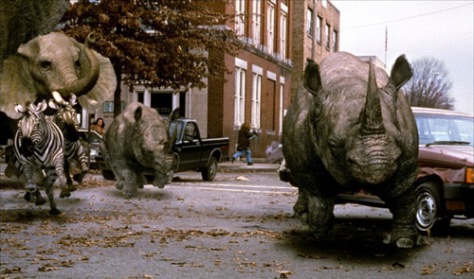 You think that Kangaroo wouldn’t have hopped his ass down to Cleveland Metroparks Zoo and let his friends out? I’ve seen enough animal escape movies to know that’s how it works.

How about being able to own kangaroos in North Ridgeville though? Screw getting a dog or a cat like normal people would, I’d want a 6’7 200 lb* kangaroo chilling inside of my house.