It’s been awhile but Cleveland Craigslist Missed Connections is back. I wanted to try and make this a weekly scheduled post but unfortunately the postings over there haven’t been consistent enough to do that. This batch doesn’t disappoint though.

Yes. The woman who came into Carrabas with her husband will be writing back to the unknown man who watched her eat spaghetti at a restaurant from a distance.

I mean what woman wouldn’t respond to such an offer? Sounds like a blast. Vroom! Vroom! 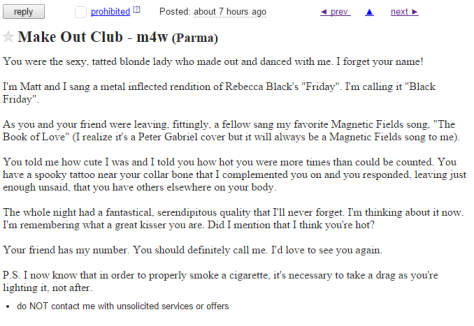 Nothing, and I mean nothing, gets the juices flowing more than listening to a metal version of Rebecca Black’s “Friday”

“Crazy sexy relations” for the win! Almost puked at the “sweatily bad” line.

Pretty tactful and understated post from my man right here… I really questioned the direction of this blog when I was editing this picture in Microsoft Paint. Lots of veins.

Pretty normal post here until you get to the part where he was “forced to leave” Marcs. Who gets forced to leave Marcs? Pretty sure anything goes in between the aisles there. I need to know what happened on that “one bad day.”

Alright. What the fuck. If you’re going to be weird on Craigslist you should probably turn your location off. Funny thing is, I’m from Willoughby (Hills) and know the area where this took place so there’s a slight chance I know this guy. I question his tactics.

I don’t know. I would have to venture to think that a woman walking into the wrong bathroom at a Steak N Shake isn’t exactly looking to hook up in the bathroom stall, ya know? Steak N Shake doesn’t exactly feel like the type of place where people would be down with that. But who knows, maybe she saw this guy taking a leak and wanted to get nuts. Who am I to judge?