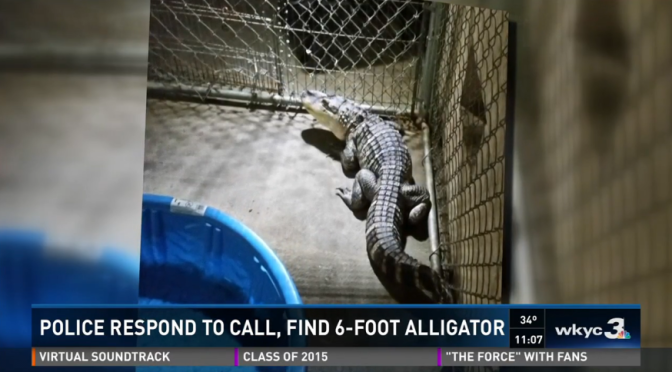 CLEVELAND — An alligator is in police custody after a man barricaded himself inside of a Cleveland home Thursday afternoon.

Police were called to the home in the 7900 block of Cornelia Avenue for a domestic situation.

When police arrived, the suspect barricaded himself inside of the home with the alligator. A SWAT team was then called to the home.

Once inside, an officer laid on top of the alligator while others taped its mouth shut. The suspect was arrested.

Gator Update 2: so the gator is resting comfortably in the kennel. With a little pool. Gotta admit, he's kinda cute. pic.twitter.com/xsC3kzRTX1

Imagine how badass that cop felt when he came home.

Scene: A man and his family are sitting around the dining room table eating dinner

WIFE: Hey Earl (the cop’s name is Earl, just go with it), how was work today? Any arrests?

EARL: “it was pretty good. Normal shit. A couple speeding tickets, shoplifting calls, a domestic violence incident… Oh yeah, and I wrestled a 6 foot alligator into submission with my bare hands. Standard stuff.

*Wife throws all the food off of the table, jumps on Earl and starts passionately kissing him*

As for the criminal, I gotta say having an alligator as your first line of defense against intruders/police is kind of awesome. It’s definitely up there in my top 5 animals I’d want protecting me in my house along with a lion, polar bear, dire wolf, and wolverine.

Thankfully no officers were hurt.