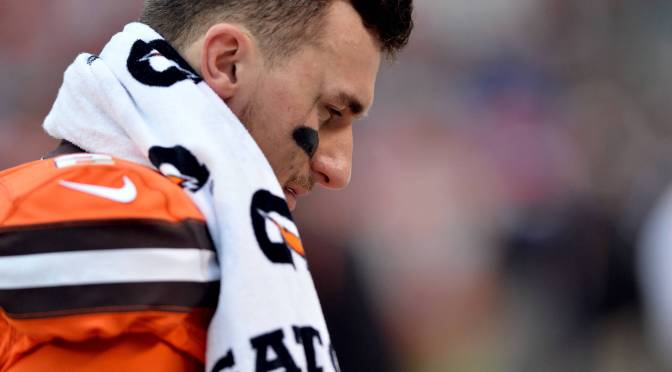 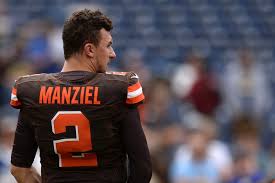 First off, I want to be clear about something – I loved Johnny Manziel. Everything about him, on and off the field. Say what you want about what he does away from football but the six times this year we got to wake up knowing we had four quarters of Johnny to watch that day were some of the most exciting times in my recent (albeit relatively short) Browns fandom memory. It was going to be beautiful, it was going to be horrifying, but goddamnit it was going to be spectacular.

That being said…I’m 100% off the Manziel train. I’m done with his shit and ready for this dog and pony show to be over. So all you guys who clicked this blog just for ammo to tell me how much of an idiot I am, know that I’m actually with you. Took me a while but I’m there.

But should it be?

Below is an excerpt from a Mary Kay article on Cleveland.com posted just four days ago:

“BEREA, Ohio — Mike Pettine admitted Thursday that Johnny Manziel needs to address his off-the-field issues again if he wants to be the Browns’ quarterback of the future.

Manziel, who’s been ruled out of Sunday’s finale against the Steelers with his concussion, has been videotaped drinking on a regular basis, including on Christmas Eve. It’s a major issue for the Browns considering Manziel spent 73 days in inpatient addiction-rehab center in the offseason.

“Here is a guy that has an NFL skill set, he’s very talented, if you spend some time with him, he’s a likable guy, you root for him,” said Pettine. “But there are problems there that we’ll talk as we’re headed to the offseason about getting addressed. And I’ve said this before, we want to make sure that all of our players are in good shape as people first, players second. Because I don’t think you can be as effective as you can be as a player if things aren’t right off the field. And he’s a good example of that.””

Let’s talk about that bolded part at the end of Mike Pettine’s quote. Yes you animals, I know he was fired yesterday. Maybe that means we should take this quote with a grain of salt. But maybe, and this is what I’d rather believe, this is a value that trickles down the organization from the top of Jimmy Haslam’s lustrous silver wig. Seems counter intuitive for something “good” or “positive” to come from the Browns front office, I know, but with concussions and other controversial off-the-field issues becoming more and more a part of the conversation in the NFL, it seems reasonable to think the added emphasis on player safety & wellness spreading throughout the league didn’t turn around at the front door in Berea. 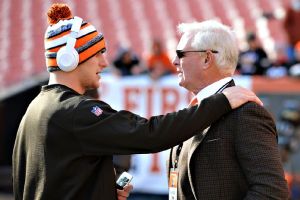 Manziel was apparently Haslam’s boy. He’s allegedly the one who wanted to draft him, not Mike Pettine or Ray Farmer. He’s the one who allegedly forced Mike Pettine’s hand and made him start Manziel at the end of last year, not Ray Farmer. There’s almost no denying there’s something going on between our owner and embattled 23-year-old quarterback. So, if this “man first, player second” mantra in the Browns organization holds true, how can Haslam help Johnny Football get his personal life in order? Cut him and let him go where he wants? Trade him for pennies on the dollar to the Dallas Cowboys?

Manziel keeps pulling stunt after stunt like this past weekend for one of two reasons: his substance abuse problems really are that bad, or he’s playing a long con to try and get out of Cleveland (something I laughed off when I initially heard it, but nobody could possibly be this immature, right?)

Let’s say scenario A is true. Nobody really knows the full extent of his problems. Hell, no one knows for a fact why he went to rehab in the first place. But we do know one thing – addicts have to hit rock bottom before they can get better, and the threat of losing football isn’t Johnny Manziel’s rock bottom. That was made clear after he went out and partied days after being named starting quarterback, only to be demoted before he could even play a game.

What would be JFF’s rock bottom, then? Obscurity. Being out of the spotlight absolutely terrifies him, much more so than being off the football field does. So what, you cut him so he can sign somewhere else and continue doing what he’s doing? You trade him to the DALLAS COWBOYS, the most Hollywood franchise in all of football who happen to play an hour and a half away from where he developed these personality traits as a kid?

If we want to help Johnny Manziel the man, you keep him in Cleveland. Let him try and get his ducks in a row for the remaining two years of his contract on the practice squad. Don’t even entertain the idea of playing him. Draft a quarterback in the first round this year. Sure, there will be some residual media spotlight on him from his career at A&M and his first two years here. But without the possibility of playing an NFL game, the circus that follows him would (hopefully) eventually die down and help him realize it isn’t the partying that gets him the bright lights he apparently needs so much. Anybody can drink. Hardly anybody can do what he does on a football field. That’s what gets him where he wants to be, not champagne and Future.

If scenario B is true, if this was all just an act to try and get the Browns to trade or cut him, all bets are off. You let him rot on the scout team for two years, hell even make him play in 2016 behind a Mack-Thomas-Schwartzless offensive line as a “thank you” for embarrassing your franchise. Don’t give Johnny Football whatever he wants for once in his life. It’s been nothing but lies since we drafted him, he’s set the Browns back years and cost who knows how many people their jobs. Fight fire with fire, immaturity with immaturity. A two-year long “Shut up! No, YOU shut up!” between Manziel and Haslam. Wouldn’t that be something?

We should probably just cut him or trade him though.