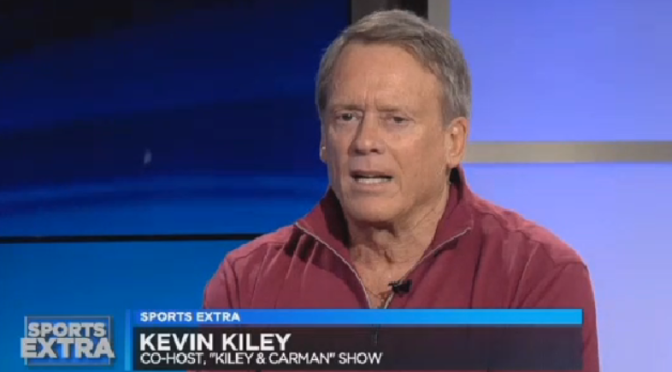 Kevin Kiley appeared with Tony Zarrella last night to discuss his comments about the Bills promoting a woman to a special teams coaching job. After he defended his comments, Kiley then revealed that he put in his resignation to 92.3 back in November and will be done at the station at the end of this month.

As for Kiley- Did I ever think he should be fired for his comments about a woman having no place in football? Nope.

Did I disagree with it? Yep.

I’ll never ever ever ever call for someone’s job just because they said something I disagree with. I think that’s lame and the people on social media who make petitions that demand someone to be fired are the biggest losers on the planet. Is Kiley an idiot for saying that? Yep. It’s 2016 and he should have known what the blowback would be. Just because you disagree with something (no matter how dumb the person is that you disagree with is) doesn’t mean that they should lose their job and their livelihood.

Let’s hope now that Ken Carman can do his own thing and make mornings bearable again.

As you can see- we’ve never been big Kiley fans around here:

"Shit I only watched 10 minutes of the ECF last night, what can I talk about?? Oh I know, let's talk about firing the coach"

Kevin Kiley just asked if pretty women know less about football than ugly troll-like women. This guy is the best

One thought on “Video: Kevin Kiley Announces He Is Resigning From 92.3 The Fan At The End Of The Month”