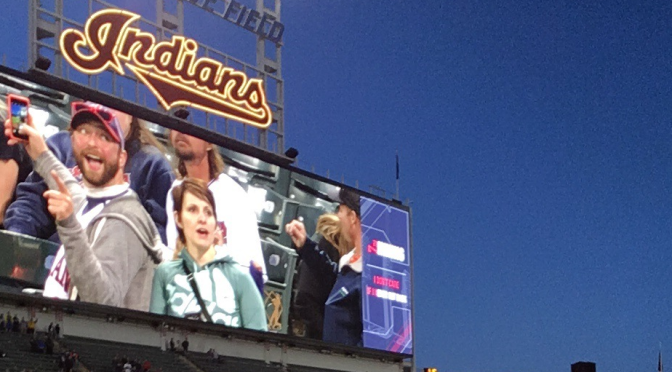 In a game that featured three hits and a bomb from Francisco Lindor, six innings of stellar pitching from Josh Tomlin and a two-out, two-run double from Mike Napoli to give the Tribe the lead early, it was Kyle Chaboudy who delivered the unequivocal play of the night at the corner of Carnegie and Ontario.

Regular selfies (ones that are taken for the purpose of showcasing things in the foreground, like the people taking it) have long since crossed over into the realm of ridicule. It is allowed, nay, encouraged to make fun of people for taking them.

In most cases, there are people in literally every direction. Ask one of them to take your picture.

You’re doing your country and, quite honestly, all of mankind a disservice if you don’t turn to the person next to you and point & laugh at the two duck-faced bimbos rotating their phone at every conceivable angle with their outstretched arm in an effort to hide as many of their chins as possible.

I mean it. They deserve it.

But selfies with a purpose, that take advantage of an opportunity to seize a moment that doesn’t come around often, those get you in the hearts of the American people and on the front page of Reddit. It’s those men and women who snap selfies to get those duck-faced bimbos in the background that our founding fathers had in mind when they talked about a “perfect Union.”

So I guess what I’m trying to say is, thank you Kyle.

That blog got away from me.