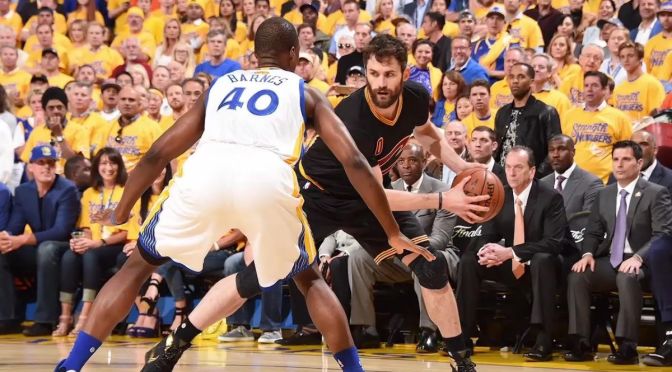 The page was started yesterday by a Bay Village Cavs “fan” named Giles Debenham. He uses this picture as the main photo, from last year’s playoffs when Kevin had his shoulder ripped out of his socket:

The title of the page reads:

Followed by in-depth analysis as to why we should want our 3x NBA All-Star, $110 million power forward to sit Game 6 of the NBA Finals:

“Kevin Love is playing like a bum and just taking up room on the court. Pay this man to take a seat and let the Cavs win these finals!!”

This is why people make fun of Cleveland.

We’re coming off a historic win in an elimination game at one of the hardest places to play in the league. LeBron and Kyrie put up one of the greatest playoff performances by two teammates in basketball history. We’re coming home for Game 6 tomorrow, and if we take care of business, who knows what can happen in Game 7 with the best player in the world on your team.

As a Cavs fan, you obviously want them to win the championship. And it’s undeniable we’ll need all hands on deck in order for that to happen.

But yeah, let’s start a fundraiser to try and pay a guy whose ceiling is one of the best players in the league at his position, to sit the most important game of the season and of his career.

Big relief after I clicked it to see nobody has given this joke a cent of their money. At least throw down a couple of your own bucks if you’re gonna ask people to do the same, Giles. Have some damn fortitude.

I understand it was (hopefully) made in jest and meant to be funny. Swing and a fucking miss. Can’t wait for the blogs to toss this charcoal into the Cleveland Fan narrative fire.