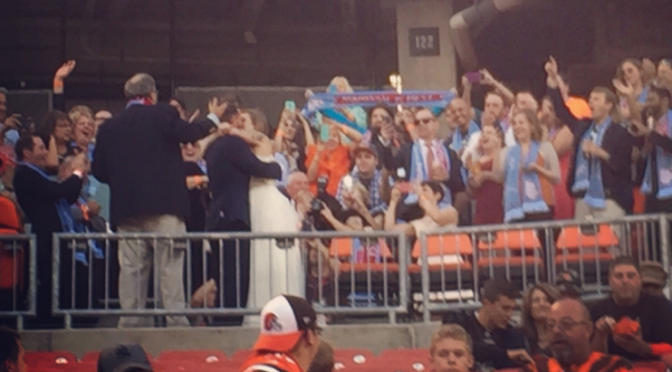 The preseason finale is meaningful to this couple. Wedding vows taking place in the stands. #CHIvsCLE #Bears #Browns pic.twitter.com/pCDEuAF3eX

It's official in section 122 in Cleveland. Bride and groom just got married before #Bears & #Browns take the field. pic.twitter.com/JyjELB2dPq

Who really knows how to define love? Sometimes it’s staying in on a Saturday night and watching TV in your pajamas together. Sometimes it’s finishing each other’s sentences and knowing what each other is thinking before they do . Sometimes it’s getting married before the 4th preseason game in FirstEnergy Stadium that’s at 25% capacity.

A wise man once said that “true love is your soul’s recognition of its counterpoint in another.”

May this couple’s future be full of dog bones, barking, and not too much letdown on Sundays.

Only in Cleveland you see a couple getting married in the crowd during a pre-season Browns game.

Just witnessed someone get married at the Browns stadium 🙄