“CLEVELAND, Ohio – Jobu is back in the Indians’ locker room.

In the movie Major League, Indians fictional slugger Pedro Cerrano prayed to Jobu, his voodoo statue, so his bats could hit the curveball. It’s unclear what real Indians Jason Kipnis and Mike Napoli do in front of their Jobu shrine, but one has been built in the empty locker empty locker between them in the far corner of the Tribe’s clubhouse.

A sweater with a picture of Jobu and the inscription, “It is very bad to drink Jobu’s rum. Very bad,” hangs in the locker. The also contains two Jobu statues with small bottles of rum placed between them.

Napoli said his agent gave him one of the Jobu statues and the sweater in spring training. Kipnis recently added another Jobu statue to the shrine, that was recently constructed in the Progressive Field locker room.

“We’ve had Jobu there for a little bit,” said Kipnis, after Tuesday’s 6-0 victory over the Rays. “He’s been working. He didn’t like the first airport vodka we left him. So we tried Bacardi (rum) and that seems to be working.

“Right now it’s working so we’re not going to mess with what works.””

VODKA, Kip? We tried giving Jobu friggin vodka before rum? How’d you know he didn’t like it, you whiff a couple times that night or something? Ground balls take a couple rough hops? We’re lucky he didn’t burn the whole park to the damn ground. Messing with Jobu’s rum is a delicate dance that few have ever walked away from. To be 11 games over .500 and have a three game lead over the Royals after dumping a couple bottles of Kamchatka at Jobu’s feet AKA slapping him directly in his face, is nothing short of a miracle.

Don’t be surprised if he sends his regrets to the #PartyAtNapolis now.

Here’s a link to the sweater online. 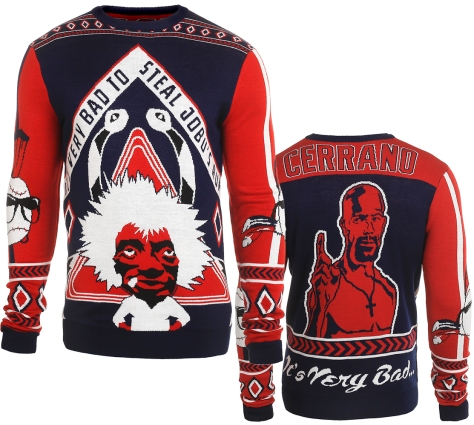 Normally I wouldn’t advocate spending 65 bucks on something that has such a specific environment in which you can wear it, but hot damn would I look glorious standing at The Corner in this in October.