Maybe the best championship parade picture of all time?

LeBron James giving the fans what they want. pic.twitter.com/hMdmRRwRQZ

LeBron James brings a championship parade with the @cavs to Cleveland! pic.twitter.com/PeytHHcgaF

TURN THE FUCK UP

This guy is my favorite so far pic.twitter.com/I4v1b01uVO

We asked Dan Gilbert how he felt about Steph Curry at the parade & he gave the best response @BleacherReport pic.twitter.com/NQNzfmQh07

Up close and personal with The King

Let’s check in on how JR Smith’s parade went:

Coolest moment ever. JR Smith holds up a kid in the middle of the parade. Of course someone added the Lion King soundtrack to it.

JR Smith does the circle of life from Lion King 😂😂🐐 pic.twitter.com/hfxMMgvEM4

Who needs a shirt when you have a ring? Not JR

The mystery of @TheRealJRSmith’s missing shirt has been solved 😂 (via @Cavs) pic.twitter.com/6hTDJSIzvz

According to the Internet, JR took a fans phone, snapped this picture AND wrote this caption. Legend.

He’s got my vote

Put this photo on my tombstone pic.twitter.com/4pVBazZiCh

A couple buddies got some butt tattoos

This dude told me that him & his buds got these Cavs tats on their butts before Game 6. Um, congrats? pic.twitter.com/W7O2XK5FqV

Hipster Tito dropped a nuke on the idiot pundits

MGK just monkeying around on a traffic light pic.twitter.com/w650UhpwqG

The streets were packed

@Bottlegate north and south at east 9th and chester pic.twitter.com/Os6WiBmkcx

Needed to cool off a little

Thanks to our colleagues @clevelandfire for providing some relief from the heat for #cavsparade goers! pic.twitter.com/sOjUvbRUjl

Who needs a farmers tan when you can get a @cavs Finals hat burn? pic.twitter.com/rIUXldi4nz

It's LOUD at the #CavsParade

It got LOUDER when @KevinLove unveiled the @WWE belt pic.twitter.com/D7XjtUFAHC

No one likes anything as much as Kevin Love likes his title belt pic.twitter.com/hAh1NlXAaF

Oh, and he also brought SI Swimsuit model Kate Bock along with him 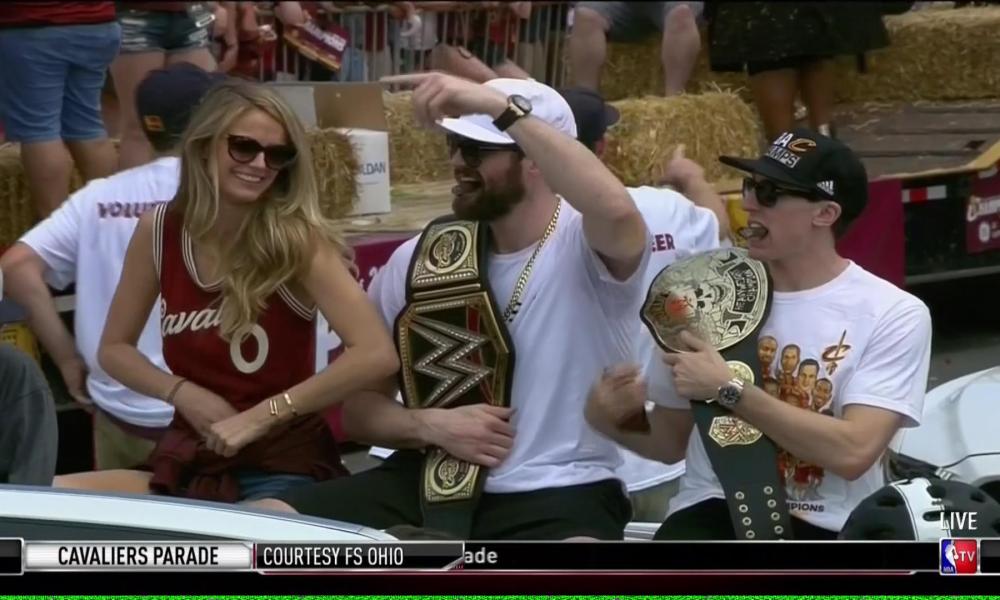 WE ARE THE CHAMPIONS

I’m pretty sure Mo Williams danced through the entire parade

The Mall and Lil Kev

A guy climbed a tree

Tristan had squirt guns on his float

Get that weak stuff outta here

Fuck up some commas

Coach Tyronn Lue is all the way up at the Cavaliers championship parade NSFW (via @_callmefall)https://t.co/NahzH4nMTE

Kyrie greeted the crowd with an enthusiasm unknown to mankind

Then he busted out a quick Running Man Challenge

And now for the overhead shots

Look at this city. pic.twitter.com/iyf2LYoXYP

Another good one. Wow. pic.twitter.com/h7xGZ89E1b

A parade 52 years in the making for Cleveland.@Cavs and the city are about to party. #cavsparade pic.twitter.com/aK1v2rLi3A

This guy wasn’t missing this parade no matter what

But my man waited 52 years for a championship. No way he was staying in the house pic.twitter.com/MATdUdaIjz

A fan may or may have eaten a little poop. No one knows if it was actually poop. Could have been mud. Yep, that’s it. A fan ate some mud. Big deal.

Cleveland fans are so happy they are eating shit with no remorse pic.twitter.com/erltWEbuf5

The Free Stamp turned into a giant chair

Here’s a view from the free stamp (via Reddit) LeBron James' final message: "I love y'all and s—, let's get ready for next year"