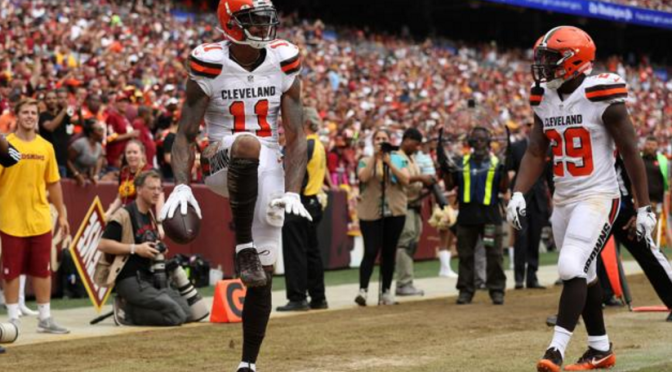 Everything about yesterday stunk.
Here’s some game tape:

Wow, the Browns have so many strengths on defense. Just kidding, it’s only one player. F off, CBS.

Hit em with the Silencer, TP

Watch ya back, Kirk https://t.co/TyXwWyhHPa

8. Counting the preseason, the 2016 Browns have lost 8 games in a row. Now I’m all for getting the #1 pick but I think this young team really really needs a win.

9. 15 carries is not enough for Crowell. He’s the second leading rusher in the NFL, feed him the damn ball.

10. Without Nassib our pass rush is just non existent.

11. Has anyone else noticed that the center position hadn’t really had any issues the past 2 games? Strange coincidence…

12. Wish the officials would pay more attention to making the right call on a fumble rather than throwing a flag for a TD dance or “shooting a bow and arrow.” Such a joke.

13. I just turned 28 this weekend and have come to the realization that I probably won’t see a good Browns team until I’m in my 30s. Do you have any idea how depressing that is? A whole lifetime of bad football.

14. I can’t really bitch too much. Literally every other team I root for is in the mix to win a championship this year.

On to New England

Last week the bogus taunting penalty. This week the phantom fumble. Johnson never lost the ball. How does this happen?? pic.twitter.com/Uo8JZ39Wu0

Stop me if you heard this before. The Browns got screwed by a bad call by an official in the 4th quarter vs a team from the DMV that potentially decided the game. Crazy, right?

Now this “fumble” wasn’t the reason why the Browns couldn’t tackle Matt Jones in the fourth quarter or why Cody Kessler threw that pick to Josh Norman. But shit, man. They don’t need bad calls by the referees to decide the game for them.

Yeah Duke fumbled it but it seems to me that he clearly recovered it himself. Show me where there’s definitive evidence that the Redskins recovered the football. You can’t. And why was the ref so quick to declare a change of possession when nobody but the Browns player was seen with the ball? In most scrums after a fumble the official usually waits until everybody is pulled off the pile to decide which player ultimately came up holding the football. HOW CAN YOU GIVE POSSESSION TO A TEAM WHEN THAT TEAM NEVER POSSESSED THE BALL.

Watch Duke Johnson's left hand at the end here. CLEARLY reaches out and pulls the ball back under his chest https://t.co/ySb1qsqhyX

This was the BS excuse the NFL laid on us

You are what your record says you are but this team could easily be 2-2 if not for a taunting call that wasn’t taunting and a lost fumble that was never lost.

Under some pressure & stress recently, had to take a time out for myself.Sometimes you have to do what's best for you. Thank u @nfl @Browns

First things first- Good for Josh for going to get some help. IF this is legit and not just a publicity stunt (*cough* Manziel *cough*) then this is a good thing for him and I hope he gets the help he needs. No shame in admitting you need help.

That said, this is weird, right? 4 days from being reinstated and no reports (yet) of failing a test. You mean to tell me he just woke up today after serving 90 percent of his suspension and said “I need to go to rehab today.” I just can’t buy that, man.

He’s been around the Browns facility during his suspension:

The Josh Gordon news is surprising. Have seen him in locker room throughout suspension. #Browns

There was the news last week of a warrant out for his arrest after he failed to submit DNA for a paternity test for over a year. Maybe this is the “pressure and stress” he was referring to in his tweet?

And then there’s the whole Drew Rosenhaus thing. Maybe this is just a power play for his client to get released from a winless team who is rebuilding. If there’s no failed test with Josh, then why wouldn’t he just prolong his suspension/time off, get released, then join another team that doesn’t have a revolving door of quarterbacks? Seems very doubtful but I’m all for a good conspiracy theory.

(he probably failed a test)