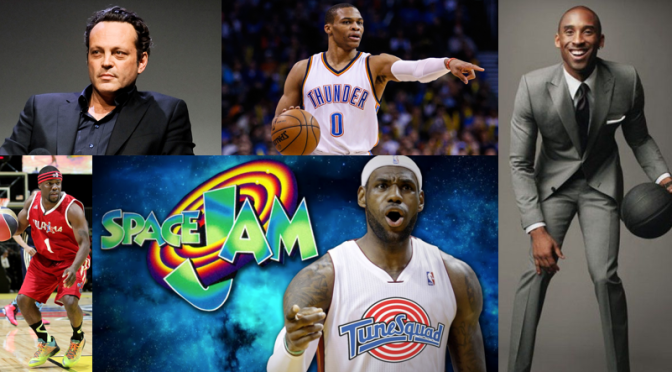 So the only big Cavs basketball news (the playoff games aren’t big news, Atlanta stinks and Miami and Toronto both stink) this past week is that LeBron will be starring in an upcoming Space Jam remake.

Am I excited about the remake of a classic 90s movie that was a staple in every kid’s house growing up? Yes and no. The remake is never as good as the original but I’d be lying if I said I wasn’t curious about how the new cast of actors and NBA superstars shakes out. Who plays the Bill Murray role? Who are the 5 NBA players that get their powers stolen?

Here’s how I would do it:

LeBron in the MJ role

Obviously. The current best player in the world. Maybe LeBron will decide he wants to pursue a career in football like MJ decided he wanted to pursue a baseball career. I’m eager to see what direction they take with this.

Had trouble picking the starting 5 for the 2015 Monstars. The original Monstars were made up of Charles Barkley, Shawn Bradley, Muggsy Bogues, Larry Johnson, and Patrick Ewing. 2 centers, 2 power forwards, and one very short point guard. My first attempt at picking the current crop looked like the 2015 NBA All Star game but that’s not how the original movie’s team was constructed. The original Monstars had the game’s tallest player (Bradley) and the game’s shortest (Bogues).

Apparently JR Smith might be in the movie. This is great for 2 things: 1) He’d be a great shooter and a Monstar JR Smith would be amazing. 2) He’d probably slide into Lola Bunny’s DMs asking if she wants the pipe.

I’m not including JR Smith in this lineup unless it gets 100% confirmed.

Gotta have the biggest athletic freak in the game here. I’m already laughing at the thought of him slashing down the lane and dunking on Daffy Duck’s face.

I imagine when he’s a Monstar he’ll have a super annoying 2 year old Monstar following him around. Also, he’s a pretty decent shooter. Don’t really know which Looney Tune is going to be able to guard an alien Steph.

The obligatory short player in the Mugsy Bogues role. He was mostly chosen because the original roster was only comprised with players from the west. He’s actually pretty decent too.

Most powerful dunker in the game. Can see him packing Foghorn Leghorn up into a ball and then jumping over a Kia to throw down a dunk from the foul line.

Seeing all of his commercials and endorsement deals you’ll know that Blake also is legitimately funny and would have the most speaking parts in the movie aside from LeBron. He may be the best pick of all the NBA players. He fits the Monstar role perfectly and he’ll steal the show as an actor.

I originally had Anthony Davis in this sport because him and his unibrow as an alien would be hilarious. I decided to stick with the “very tall funny white guy from the Dallas Mavericks” theme from the first movie and Dirk fits the bill perfectly. There’s too much potential for a tall Monstar who can shoot threes and has a thick German accent to leave him out.

Need a quick witted guy in this role and let’s be honest, Vince needs some good pub after the disaster that was True Detective season 2. Vince will be a good sidekick to LeBron and I’m guessing he has some basketball chops as well. He’s also 6’4 but sometimes gets dunked on

I have Kevin Hart exhaustion but him and Bron are boys and their chemistry here would probably actually produce a couple laughs.

Kobe fills the “recently retired rival” role that Larry Bird played in the original. I don’t really see Kobe being much of a golfer though.

LeBron’s biggest critic, the hot take king, and arguably the most recognizable face in sports media makes this a no brainer

Did I just cast the movie of the year? I don’t know, maybe. Comment below on who’d you pick or tweet us @Bottlegate

This blog was originally supposed to be posted on Wednesday of last week so I’m sorry.