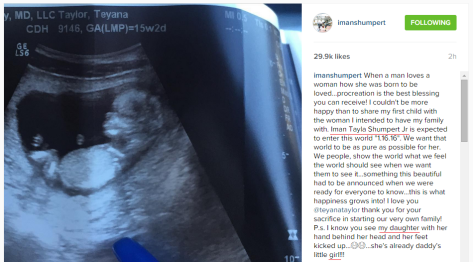 Shump’s Instagram– When a man loves a woman how she was born to be loved…procreation is the best blessing you can receive! I couldn’t be more happy than to share my first child with the woman I intended to have my family with. Iman Tayla Shumpert Jr is expected to enter this world “1.16.16”. We want that world to be as pure as possible for her. We people, show the world what we feel the world should see when we want them to see it…something this beautiful had to be announced when we were ready for everyone to know…this is what happiness grows into! I love you @teyanataylor thank you for your sacrifice in starting our very own family! P.s. I know you see my daughter with her hand behind her head and her feet kicked up…😂😂…she’s already daddy’s little girl!!!

Love this move by Shump. Just saying “screw it” to all the social norms and deciding to give his newborn baby daughter the same name as her dad. I imagine his thinking was “if I’m not going to have a son to pass down my name, I’ll just give it to my daughter.” I’m totally onboard with this.

Apparently Iman is a name for both girls and guys according to this random person on Twitter who doesn’t follow me:

@Bottlegate it's a unisex name and mostly used for girls. So big Shump is the weird one

Not gonna lie though, this is a little weird, no? It’s like if Riley Cooper named his little girl… Riley.

I assume a few years from now this will cause some problems. Just imagine Teyana standing in the kitchen as the dishwasher is overflowing with water and she screams “Iman, get over here and fix the damn dishwasher!!” In runs little 3 year old girl Iman with a wrench ready to go.

Per Shump’s Instagram, this has to be the exact moment little Iman Jr was conceived, right?