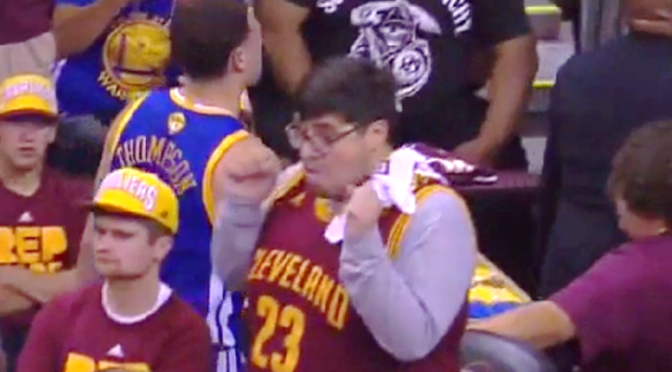 After game two’s blowout, the Cavs needed to come out and play with more intensity and urgency in game three. They needed to set the tone early and as soon as that ball tipped they had to play like they were possessed.

But this wasn’t exclusive just to the players. The fans needed to bring their A game if the Cavs had any chance to win. In the first quarter, Klay Thompson clumsily ran into a Timofey Mozgov screen and got a Charlie horse on his leg. Poor Klay. He would hobble off to the locker room to get it looked at and then eventually return to the game in the second quarter. On his way to the locker room this happened:

And just like that a legend was born. The word “savage” gets thrown around a little too loosely these days but this move right here was just pure ruthless savagery. No other way to describe it. Between this and the guy challenging Steph Curry  to a fight, I’m not sure the Splash Brothers can recover.

After some Internet sleuthing (Twitter) we were able to track down this guy and his name is Matt Zukerman.

Matt was gracious enough to sit down for an exclusive interview with Bottlegate (we sent him an email with a list of questions) so we could really get inside that head of his and see what makes him tick.

Our questions and commentary in bold.

Who is your most hated GSW player?

I can’t stand Draymond Green. The constant whining and kicking people makes him seem more and more like a child every time I watch him.

Big fan of Baskin and Phelps. They have great chemistry along with great insight into Cleveland its sports and its fans.

Favorite blog in Cleveland besides Bottlegate?

Fear The Sword. Have to get my Cavs fix. (good answer. they’re good)

Do you put ketchup on hot dogs?

No. Just Stadium Mustard. (my most hated answer he gave us)

Is Riley Curry cute or just kind of cute?

I’m more of a Sonya Curry fan. (Sonya > Every other woman with the last name Curry)

How many games do the Browns win next season?

How does it feel to be Internet famous?

I don’t know if I would say that but it’s really funny getting this attention for something I thought no one would see.  (Welcome to 2016)

Was it scary to have all of those women throwing themselves at you after you became Internet famous on Wednesday night?

Haha I wish! No one at the game noticed that this happened, but a ball boy came up to me a while after it happened to tell me that there was a video of me and his friends were telling him because he was in the video as well.

Do you have tickets to game 4?

Just got the word that I will be attending the game Friday.

Can you take me if you have tickets to game 4?

Ahh wish I could. (totally rethinking this interview if there aren’t any perks)

Has to be Red. (Ate at Red a month ago. This is a good choice)

LeBron James. He’s a one of a kind athlete and I’m so happy to have him represent Cleveland.

Have to start with RG3 but who knows what Hue or Jimmy will do.

Do you start Kevin Love in game 4 if you’re Ty Lue?

I have to say no. If it works, don’t tinker. Lue has to keep RJ in the starting lineup, make Kevin come off the bench and prove he can help in the offense and defense. (Agreed)

Pancakes. (There really is no right answer. Both suck)