The story was published on October 24th.

Here’s where LeBron comes in:

“My bucket list is to meet LeBron,” he tells me. “That’s the one thing I want to do. Meet LeBron James. That’s my role model. He inspires me to do everything. To be a good person, to put other people first, to live your life and do what makes you happy. If I meet LeBron James, that would make my day. I wouldn’t ask for anything.”

I tell Emanuel that LeBron is a great guy and would no doubt be honored to meet him. I tell him, let’s see if the Cleveland Cavaliers are coming to Bankers Life Fieldhouse this season to play the Pacers. Emanuel and I have talked several times, in person and on the phone, and now we’re on the phone and I’m telling him to wait as I look up the Pacers’ sched–

How did you get that so fast?

“I’ve got the Cavaliers app on my phone.”

LeBron would be lucky to meet this kid. It’s like what Bryan Rutland was thinking when he tried to get Emanuel Duncan on the team. The football team needs, LeBron needs – everyone needs – a little bit of what Emanuel Duncan has. 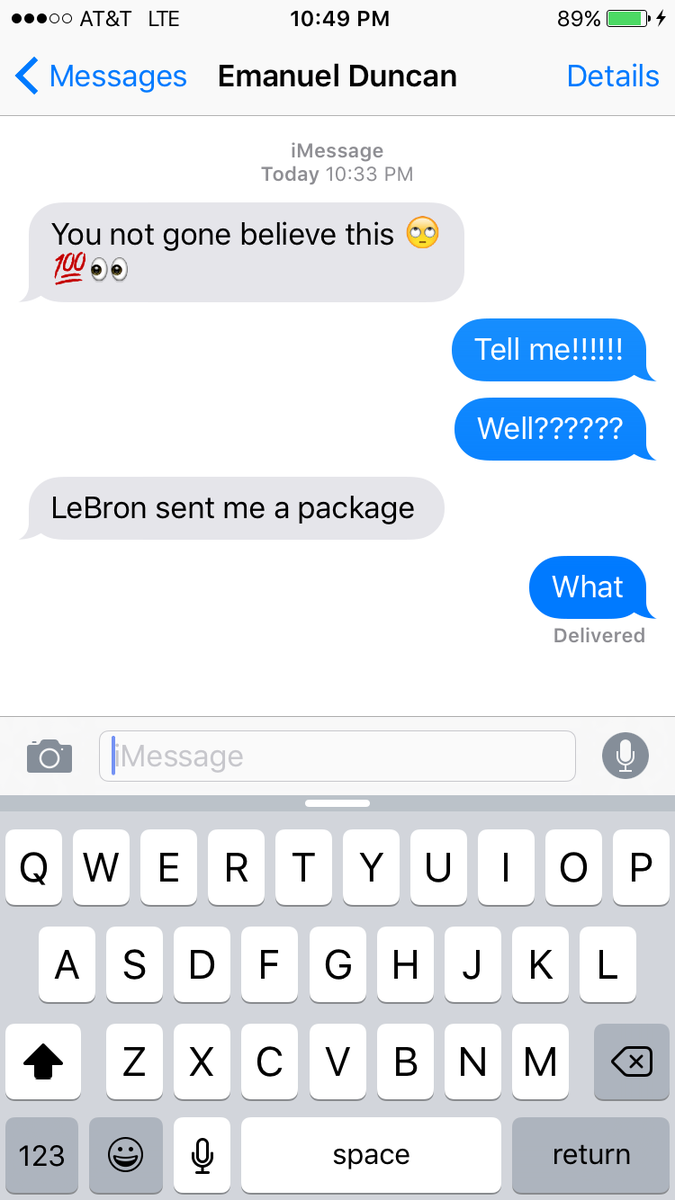 Along with the Beats and signed jersey, LeBron also included a letter to Emanuel.

Pretty awesome story about Emanuel Duncan and pretty awesome gesture from LeBron James. Knowing that someone contacted LeBron after reading Doyel’s story and then knowing LeBron took the time out of his day to write this letter and send this package is pretty wonderful. It just shows you that all of the hate that LeBron gets is so unwarranted.

Now let’s get Emanuel to that Pacers-Cavs game on February 1st. We need some Cavs fans in Bankers Life Fieldhouse.

From The Cauldron (go read it, it’s worth your time)

Chuck, you have never so much as shook my hand, let alone exchanged a single word with me. Few of you have, to be honest. Respectfully, your worry over my “problems” with substance abuse and my twisting descent into darkness and, apparently, my impending death, is misplaced — mostly because you have very little idea what you are talking about. None of you do, even those of you who seem curiously obsessed with the goings-on in my life.

You’re done with me, Stephen A.? That presumes we ever actually got started. How, exactly, can you be “done” with someone you have never had a meaningful conversation with beyond a quick First Take spot? Regardless, I am relieved that you no longer need to harbor sympathy for me — mostly because I never asked for it, never wanted it, and certainly never needed it. I am not a victim here; I never claimed to be one, either.

And Cris, your level of interest in my life is even more puzzling, especially considering we have never met, either.

Reading this as a Browns fan and only a Browns fan you think to yourself “How many chances can we give one guy?” and “What an idiot!” and “He’ll never play another down in the NFL again!!!”

So stepping away from this opinion and stripping myself of my Brown and Orange fandom it’s refreshing to see an athlete stick up for himself this way. Too many times we let the media twist how we think about a player or a situation. If you listen and read the things that were said about Josh Gordon this week you’d have thought that he was the biggest thug/loser/unintelligent person on the planet. Clearly after reading this article that couldn’t be further from the truth. We don’t know Josh Gordon the person and neither do 99.99% of the people talking about him.

There’s so many “hot takes” and strong opinions nowadays and they’re all just put out there for publicity and page views. When I interned at a sports radio station in town, one of the hosts (you guys all know him) taught us “You’ve always got to move that needle” meaning that sometimes you even have to say dumb, outlandish shit to get a reaction out of people. I hate that.

That’s not to say we’re not all innocent. I’m sure when news broke on Sunday that he failed another test a lot of “Fucking idiots” were muttered or screamed. I know I did it. Hell, I even wrote post that mocked him failing another test.

Does Josh need to grow up? Yes, absolutely. He said so in his essay. Has he made stupid mistakes? Yes. Is he an idiot? Yes and no. He’s made idiotic mistakes but he’s not an idiot. He’s 23 years old and is one of the main faces of a franchise in the most popular sport in America. I’m not defending him for the mistakes he’s made but I’m not really a fan of piling on a person when they’re down. I think it’s the lazy thing to do. Do I think he should be suspended? Yep, 100%. He broke the rules. (How about Wide Receivers coach Mike McDaniel who was on the trip with them who saw Josh drinking? C’mon dude.)

-Marshawn Lynch doesn’t talk to the media? He’s an unprofessional asshole who doesn’t care about his fans. He doesn’t have anxiety he’s just a dickhead.

-Richard Sherman talks to the media and tells you what’s on his mind? He’s a spoiled entitled loud mouthed athlete who needs to shut up and play football.

-Russell Wilson gives PC and cliche answers? He has no personality and is a pussy who only says what people want to hear.

-Josh Gordon writes an essay defending himself about people defaming his character? He’s a liar. Selfish athlete into the “baller” lifestyle who’ll be out of the league soon.

You literally can’t do anything in this day and age without people forming a negative opinion about you. It sucks but that’s just the way things are. People hear a radio host bad mouthing someone on air or read a column on ESPN.com and automatically think “Oh, that guy’s right! So-and-so is an immature jerk who’ll never make it in this league! I hate him!” People are so easily influenced by what other people say and go along with groupthink too often. I can’t stand when that happens.

Here’s hoping that if Josh sits out this year he can come back bigger and better no matter what team he’s on.