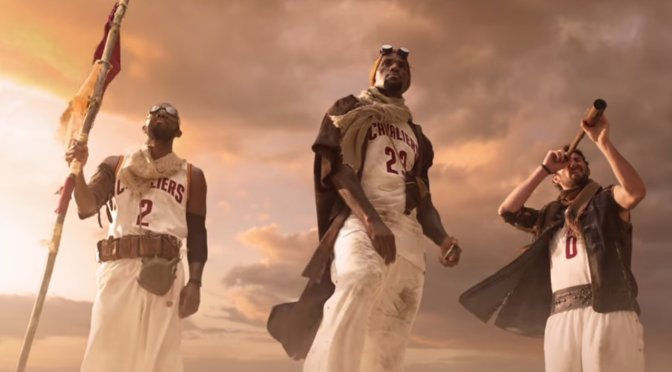 (there’s also a behind-the-scenes video in the article)

“Basketball is almost back, and 30 teams will soon embark on their own quest. It starts with Trainwreck star and occasional basketball player LeBron James and his team, the Cleveland Cavaliers — along with comedian Mike Epps — on “The Quest.”

“It’s awesome, man. The creative behind it makes sense for us,” says Cavaliers guard Kyrie Irving. “It fits for what we’re trying to do.”

The players sport desert adventurer garb and gather at the top of the dune. Sadly, the players weren’t actually shuttled to Dubai to film. EW has an exclusive behind-the-scenes video that breaks down production on the video and features interviews with Epps and Irving.

I don’t know what Black Doug from The Hangover is doing at the end there but other than that, this spot is flawless. LeBron with his compass, guiding the Cavs to Mr. Larry O’Brien. Kyrie with his staff, sticking it into the ground and stuff. And Kevin, longingly gazing at the trophy that has eluded him his whole career using a spyglass (full disclosure: I initially typed “telescope”) cause he has bad eyes or something. 30 seconds of poetry in motion.

I guess our celebrity companion could have been worse though. I want absolutely nothing to do with Billy Crystal after the Yankees got shut out at home last night, and if I’m not mistaken, D.J. Hughley isn’t a real person. Mike Epps exists, so we got that going for us.

Clutch of TNT to debut it during the NL Wild Card game tonight, too. The promise of 30 seconds of Kevin Love is more than enough ammo to convince my girlfriend to let me watch it.