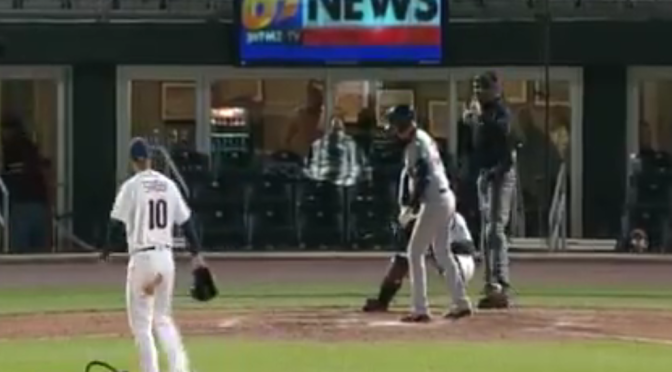 “Lehigh Valley IronPigs manager Dave Brundage came to Brock Stassi in the dugout in the seventh inning of Thursday night’s game at Coca-Cola Park. The IronPigs were trailing Scranton/Wilkes-Barre 10-1, and after having to use the bullpen for 13 of the last 18 innings of baseball, Brundage was looking for help.

Brundage called on Stassi to toe the rubber in the ninth inning, with the RailRiders’ 4-5-6 batters due up.

Stassi punched out Slade Heathcott on six pitches to begin his outing. Then, Swisher walked to the plate.

The first pitch was a strike, low in the zone. The second and third were balls, one high and the other outside. Swisher fouled the fourth pitch, before the fifth came in low and inside for ball three.

Stassi had seen Swisher mash plenty of baseballs before. On a 3-2 count, he wasn’t serving up a fastball.

The looping breaking ball dropped into the bottom of strike zone at a slow-motion 69 mph. Swisher watched it go by. Umpire Ryan Additon called strike three.”

I was gonna start out the blog with “oh, how the mighty have fallen” but this is more of the mighty’s outstretched hand falling to the ground from one last grasp at hope after lying down helplessly since 2013.

Do yourself a favor and read the full article from Greg Joyce (@GJoyce9). He had me on the edge of my seat, feeling like I was watching this clash of the titans unfold with my own two eyeballs.

“Then, Swisher walked to the plate.

This was the former major league All-Star Nick Swisher, the World Series-champion Nick Swisher, the one who has hit 245 homers in 1,527 big-league games and is now trying to get back there while playing for the Yankees’ Triple-A club.

“Just don’t leave the ball up and get yourself hurt,” Stassi thought to himself.“

“I guess that’s a feather I can put in my cap,” Stassi said with a chuckle.