Think Asdrúbal knew it was gone?

Two handed flips are always more emphatic but a little tougher to execute. You get too much extension with one arm, who knows where that sucker is going. No problems here. He got one and a half rotations with the bat and landed it perfectly parallel to the ground. And like Larry Bird in the 1988 3 point contest, he knew he got it. Didn’t even have to watch it clear the fence.

He’s also blonde now too, so that’s a thing. 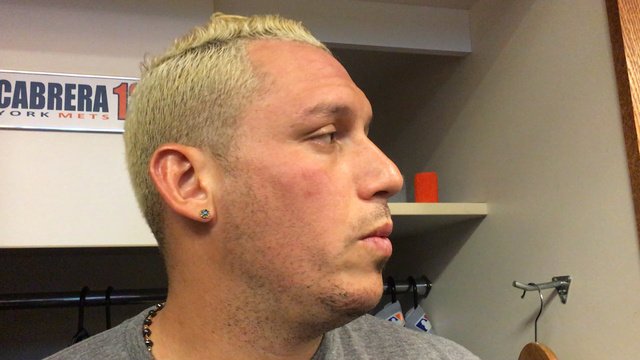 I’ve seen this challenge floating around Twitter before and recently Barstool mentioned it. Here’s Katie Nolan trying it back when she was with Guyism in 2013:

So last Friday night’s Indians game v the Oakland Athletics would be the day.

I got downtown around 6:30 at my buddy’s place and we’d Uber over to Progressive Field just in time to make it by first pitch because we’d need every second that we could get. If I’m housing 9 beers and 9 dogs I want to make sure I take advantage of the timing aspect of it.

From the beginning I was fucked:

Traffic messed us up. Audible to City Tap for beer #1. Got our work cut out for us. No excuses. Time to power through this setback.

Gridlocked on the way to the game. Cars everywhere. The only good thing was that I was able to catch a few Pokemon in the backseat of the Uber while we were sitting on Euclid.

That pic was snapped at 7:31 pm and the first pitch was thrown at 7:10. I was already 20+ minutes behind and I hadn’t even stepped foot in the ballpark yet.

Once we got into the Prog it was full steam ahead and we made a beeline to the dollar hot dog guy who let it be know that there was no limit on number of hot dogs you could buy. This guy was the best.

We (I use we because I was with my friend Will who has actually sometimes occasionally writes a Cavs article for this site) set up shop on a garbage can next to the women’s restroom (sup) and went to town on some dollar dogs. We each put down 4 dogs within the first 10 or so minutes inside of the ballpark.

4 dogs down. Saving the wrappers. pic.twitter.com/yp1JVq42aw

Here’s where my strategy got messed up. I tried to keep everything equal.

In hindsight I don’t think this was the best strategy. After about an hour the hot dogs built up and mixed with the beer and by the 6th inning I felt like I had an anvil in my stomach. I felt like the blobfish. If you’re going to try this at home I suggest getting 6 or 7 hot dogs down right off the bat. That way you can just coast to 9 beers if you keep up a good pace.

1 hour and 10 minutes into the challenge I wasn’t feeling too great.

Needed some motivation. Reached out to the loyal Twitter followers to give me a little push. If the thought of a dead gorilla doesn’t get you juiced up then you, my friend, do not have a pulse.

@Bottlegate do it for Harambe

6 minutes until the final out and this is all I had left:

I poured that Budweiser in a cup and it was gut check time.

I couldn’t get it all down

Really needed a bottom of the 9th. Fuck. pic.twitter.com/hxyNCfuzBy

I gave it my all. Will hold my head up high.

(Technically it was only 8 1/2 innings but whatever) pic.twitter.com/i9DGwonCuv

Walking into Safeco.. Rounded a corner and ran into a big dude.. He laughed and called me for a charge.. Embarrassed I kept my head down..

.. I laughed and kept walking… Teammates behind me were like "you know who that was, right?" …….. Ken Griffey Jr…. My childhood idol

… That's my only interaction with him ever 😐

I don’t even care who your favorite team or player was as a kid…if you grew up in the 90s as a baseball fan, missing an opportunity to meet Junior because you got called for the offensive foul is soul crushing.

Who are we thinking the teammates were, standing behind him pointing and laughing? Frankie has gotta be a heavy favorite since there’s laughing involved and him and Kip are best friends in my brain. Naquin too, because he did grow up in the 90s and its just basic science that every left handed outfielder ages 20-30 wanted to be Junior at some point. And probably Juan Uribe, pretty sure he’d recognize The Kid from when he used to babysit him.

I had my head down! He was around the corner before I looked back https://t.co/csyBS5Gcfy