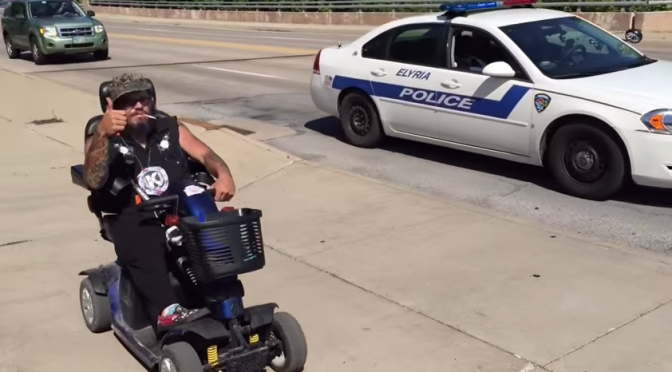 Complaints had trickled in over the last few days after a man was spotted driving his motor scooter on roadways and into traffic, even keying vehicles as he went by. Yesterday, Elyria police attempted to take action and pull the man over near the 400 block of Cleveland Street, but the man — later identified as 31-year-old Graham L. Ley — evaded the officers by cutting across four lanes of traffic.

A low-speed chase ensued as Ley crested the sidewalk on East Bridge, refusing to pull over. A second patrol car was deployed to cut the man off, bringing Ley and his motor scooter to a stop just before a car wash.

It’s not often but you know how sometimes you find yourself rooting for the civilian to escape the cops? It happens to me when one of those bozos runs onto a baseball field and is somehow able to evade the 5-0 with wit, speed, and guts. This is basically the same feeling I had while watching this video. I found myself rooting for the Scooter Man to go all Fast & The Furious and press the Nitrous button and blow on past them.

What’s the law being broken here anyway? Being too badass? Being the king of the Elyria roadways? Looking TOO good while smoking a cigarette on a scooter? I don’t know, man. This seems like a waste of time to arrest this guy.

(turn the volume on)