Those weird ass Taiwanese Animators dropped this year’s NBA Finals preview video yesterday. Last year’s edition featured LeBron spraying Rogaine in Steph’s face, Delly laying on the ground with blades for legs and cutting Klay Thompson’s leg off at the knee, and Draymond Green hurling cans of SpaghettiOs out of his mouth. No way they could top that this year, right?

You don’t know the GD Taiwanese.

We start out with Bron and Steph trading bitch slaps, standing on turntables for some reason:

Bron and Kev then proceed to run over a crying, cheerleading Drake in a convertible:

The Warriors had to come back from a 3-1 deficit against OKC, so next we see Steph kindly giving Kevin Durant from “Oklachoke City” (Chokelahoma was too easy) the Heimlich (and he spits out a ninja turtle?) before draining a backwards three-quarters court shot.

LeBron is quite literally murdering the rim so far in the playoffs:

This is why you keep the thing that guards your mouth, IN your mouth Stephanie:

Kassius Klay makes an appearance raining some 3’s, taking the form of what looks like a cement block. This one didn’t do it for me. Last I checked, Klay isn’t known for being tough. Swing and miss, Taiwan.

The supporting cast makes their first appearance, featuring Harrison Barnes as a barn, Channing Frye as a thing of french fries, JR Smith on a hoverboard and Andre Iguodala as regular Andre Iguodala: 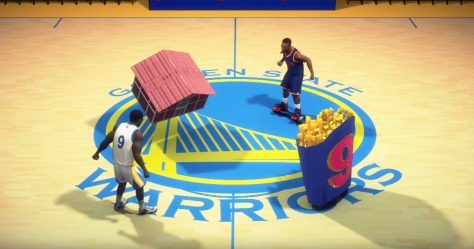 The video takes a graphic turn when LeBron flops and falls backwards into an ocean and gets eaten by a shark:

And we finally wrap things up with LeBron getting crushed by Block and Steph, riding a gigantic shoe and holding the Larry O’Brien:

I guess that means they’re picking Golden State? Who fucking knows with these guys. Entertaining as always though.