The 2015 Super Bowl commericals were kind of meh. Every year you go in expecting these amazing awesome commercials and every year you’re always left disappointed. We had kids dying, Fiats getting boners, pigs flying, lost dogs, and movie trailers. Here’s the top 13 ranked:

Dumbest commercial ever. Here, take my dollar and hand me my McChicken, please. McDonald’s has really been trying hard at this “heartwarming commercial” thing and each one has backfired and been met with criticism. Everyone knows your food is unhealthy as fuck. Quit trying to be something you’re not and let me enjoy my Quarter Pounder and fries. I know it’s bad for me and I’m still going to willingly eat it.

Still don’t know what Squarespace is but anything with The Dude creepily humming next to a sleeping couple always makes the list. 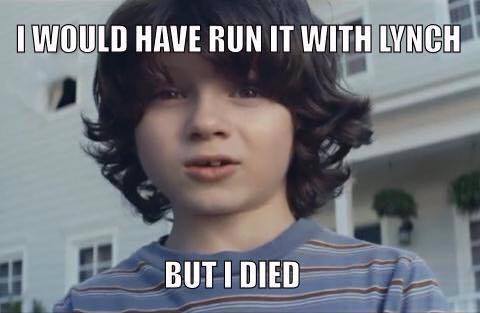 This commercial went 100 to 0 real quick. What the fuck, Nationwide? Biggest stage in the world and you hit us across the face with this?

“I hope you’re enjoying this Super Bowl between two great teams but don’t enjoy it too much because right now your child could be taking a bath and he’s probably going to drown and die a terrible slow death. Now here’s some insurance you can buy.”

This by no means is an endorsement of this commercial but you can’t deny the impact it had. By far the most talked about commercial of the night.

Carl’s Jr. introduced an all natural burger. Hey Nationwide, let’s follow the script from Carl’s Jr. here… Instead of dead kids depressing everyone how about we use burgers & hot swimsuit models that make everyone happy?

Just great execution all around. Can you imagine the numbers the kangaroo probably put up at the combine?

Good stuff. There’s a Browns/Super Bowl joke in there somewhere.

Fiat coming in strong with boner jokes. Giving a Fiat a Viagra is like giving a Japanese guy a Viagra. Even when it gets bigger it still doesn’t handle well, leaves the driver unsatisfied, and is still pretty small.

Anyone who’s ever flown knows the horrors of sitting next to a passenger from hell on an airplane. You’re always next to the guy who takes up the armrest and whose belly fat spills into your seat.

Awesome. And I thought I was brave for going out in last night’s snowstorm to pick up pizza. Cheers to this little guy.

Was there ever a doubt? Americans love puppies, the Budweiser clydesdales, and happy endings. Anheuser Busch hit it out of the park per usual.

Like every other red-blodded American you’ll be sitting in front of a TV, beer in one hand, pizza in the other, ready to watch the Patriots and Seahawks square off in Super Bowl 49. If you’re like me you probably have at least 10 or 11 different bets ready to go for the game. Aside from the normal betting lines, over/unders, player props, you’ll be throwing your hard earned money on the dumb random asinise stuff like the National Anthem length, coin flip, and the color of Katy Perry’s hair. There’s no greater thrill than betting the rent on the color of a pop star’s hair when she performs at halftime. It’s what separates the men from the boys.

The Super Bowl is when we’re gonna thrive. All of the countless & countless & COUNTLESS bets you lost during the fall football season are erased Sunday. Things like betting Ohio State football to win under 10 games and/or betting the Cavs to win over 59 games (I did both of these oops) are nullified once you nail that Gatorade shower color.

I don’t think Belichick & Brady lose 3 Super Bowls in a row. No way no how. With all the bullshit that’s been surrounding them the past 2 weeks I think they come out strong and win pretty handily.

Pick: Patriots and OVER

First player to score a touchdown

I’ve never gotten one of these right so we’ll throw some money on Marshawn Lynch, Julian Edelman, and Shane Vereen.

All Other Prop Bets

Under- 2 minutes 1 second EVEN

The anthem is being sung by Idina Menzel (you know, the chick who sings Let It Go from Frozen)

Here’s her rendition at the 2014 All Star game. As you can see she’s SLOW. Dragging out notes, dramatic pauses, all that jazz. In her All-Star game rendition she was 1 minute 59.44 seconds. That’s just for the MLB All Star game which has what, like 1,000 viewers? The Super Bowl is the biggest stage in the world and Idina is gonna milk this thing.

Which coach will be mentioned first after kickoff?

Which coach will be shown first on TV after kickoff?

Pick: Belichick for both bets

The game is being played in a climate controlled environment. Everyone is saying no sleeves. You know Bill is aware of this prop bet  and you know he’s aware that the cut sleeves are the favorite. This is why I’m picking sleeves. Bill is gonna give everyone the middle finger and stick it to the public once again.

Will “Uptown Funk” be used in a Super Bowl commercial?

You can’t walk five feet without hearing Bruno Mars belting out “Dont believe me just watch!” This song is EVERYWHERE. You know some commercial or movie trailer that’s shown in the third or fourth quarter will have it as their background music. This right here is my bet of the day.  Hammer it.

How many viewers will the game have

Here are the viewership numbers for the past 5 Super Bowls

It’s been hovering in the 111-111.5 million range the past 4 years and I think this 2 week layoff that the NFL does kinda makes the game lose some momentum. However, with all the social media, with deflategate being a national talking point, and with Katy Perry performing at halftime, this game is going over 113 million.

Everyone and their mother is picking Roar but I don’t see it as a good opening song. I feel like Roar is more of a “rising action” song that builds to the climax (last song) which will undoubtedly be Firework. Wide Awake has that it factor, it just sounds like an opener to me.

Her last 10 shows have opened with Roar (yes I researched). You think she’s going to open with the same setlist she’s been using? Get the hell out of here. This is the Super Bowl, she’s switching things up… If it’s not Wide Awake then E.T. is another strong candidate as well.

Tens of millions of men across the United States will be heartbroken if it’s a no. Therefore it SHOULD be a yes. Do the right thing, Katy. Let ’em breathe.

It’s either going to be normal black/brown or purple. I don’t like the 2/1 odds for black so I’m going with purple.

A commercial will feature under-inflated footballs

Admittedly I don’t think that any commercial using Deflategate as a joke will sneak past the NFL but these odds are just too good to pass up. You’ve gotta throw a couple of bucks on yes and hope for a big payout.

Essentially this comes down to which team you think is going to win and what color Gatorade you think they’ll be drinking for the game. I’m picking the Patriots to win. In their past 3 Super Bowl wins they’ve had clear, and then twice have had no Gatorade bath because Belichick hates fun… I don’t know why but I’m leaning red. Wildcard, bitches.

Who will the MVP thank first?

Again, this bet focuses mostly on who you think will win the game. If the Patriots win I think the MVP will be Brady or Gronk. Brady is 100% going to thank his teammates or the organization while Gronk will probably thank Fireball  whisky or the person who invented 69’ing.

If you think the Seahawks will win, Russell Wilson is a good pick for MVP. He’s undoubtedly thanking God. Now if the Seahawks win we have to pray that Marshawn Lynch somehow wins the MVP and thanks himself or just doesn’t talk at all.