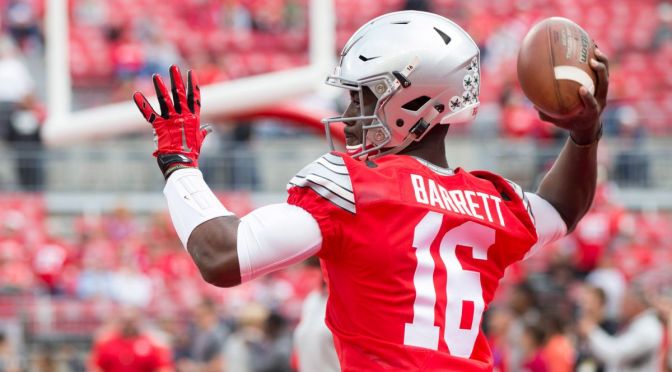 “According to two sources within the Columbus Police Department, Ohio State quarterback J.T. Barrett was arrested for operating a motor vehicle while impaired (OVI) early Saturday morning near campus.

Barrett, 20, was arrested near High and Tompkins, just north of Campus after policed noticed the player attempt to avoid an OVI checkpoint in the area. Per CPD sources, Barrett was cooperative and blew into a breathalyzer, registering slightly over Ohio’s legal limit of 0.08 blood-alcohol concentration.

The quarterback was released to his teammate, fellow quarterback Cardale Jones, who provided Barrett a ride home.”

CPD sources said Barrett blew just over Ohio's legal limit of 0.08 and was cooperative. Picked up by Cardale Jones.

WELP! That’s nice to wake up to on a Saturday morning. File this under “things I didn’t think would ever happen in one million years.” If you told me a player from one of my teams got a DUI and gave me 100 guesses, I don’t think I’d say  JT if you gave me an additional 100. All you hear about is his this kid’s character and leadership abilities, hence being named one of the 6 captains on Ohio State as a sophomore. Then he’s finally named QB1 before last week’s 49-7 drubbing of Rutgers and BAM! DUI. Woof.

We’ll see how this plays out, but apparently Barrett could be suspended for two weeks under Ohio State’s student-athlete drug and alcohol program. That’d put him out for the Minnesota and Illinois games, and firmly behind Cardale heading into the Michigan State game.

UPDATE: Barrett has already been suspended for the Minnesota game. That was quick.

Ohio State has suspended J.T. Barrett for next Saturday's game against Minnesota for OVI charge. https://t.co/iHbptpwZUm