Here are some hype videos to ease your nerves/get you so worked up that you develop a brain aneurysm and your head explodes and you don’t end up seeing one second of the game today. Either one works.

That song BANGS. For your downloading pleasure it’s: A Perfect Circle- Counting Bodies Like Sheep To The Rhythm Of The War Drums

Ohio State and Michigan will meet for the 113th time Saturday – backed by approximately 112 years of bad blood. pic.twitter.com/oqrnNAVO4E 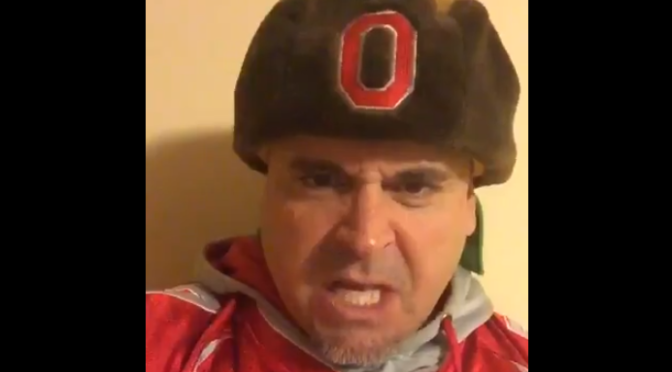 In case anyone needs pumped up for the OSU game this weekend, here is my father. #GoBucks pic.twitter.com/P6ECGHMkcL

FIRED UP!
God damn am I ready to run through a brick wall after that. Some people find motivation through different practices. My motivation comes from middle aged men yelling into a cell phone camera telling me that I should be FIRED UP for the Michigan-OSU game this weekend. Different strokes for different folks.

The Ohio State-Michigan rivalry never stops, takes no days off, and is the biggest rivalry in sports 24/7 365 days a year. Last night on Twitter proved this when former Buckeye players went IN on Jim Harbaugh after Jim made some stupid comment about tattoos in regards to Gene Smith’s comment about the Michigan football program.

Ohio State AD Gene Smith on holding spring practice in Florida: "If we were jump starting our program, I'd probably try to do that too."

Pretty harmless troll job from Gene here. Nothing too harsh or disparaging. But Harbaugh decided he’d swing back and try and go for the knockout:

Good to see Director Smith being relevant again after the tattoo fiasco. Welcome back!

Oh Jimmy. Don’t tweet about being relevant after that 42-13 drubbing to Ohio State in Novemeber and when Michigan’s record vs Ohio State over the past 15 years looks like this: 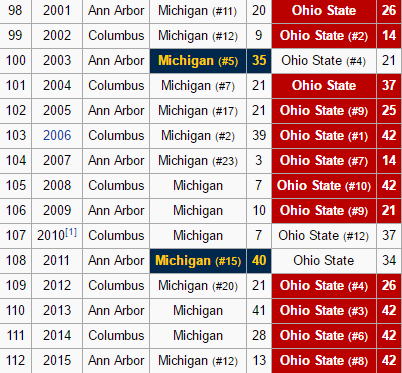 And Jim is dead. I’m actually a big fan of Harbaugh because he makes Michigan semi relevant again, but he had to know that his tweet would get this reaction.

Other Bucks players chimed in too:

But we got the really BIG rings… https://t.co/FkYBtqZ8HJ